Abortion Debate Illustrates How human Rights Are Not Absolute, But Evolving, Professor Says 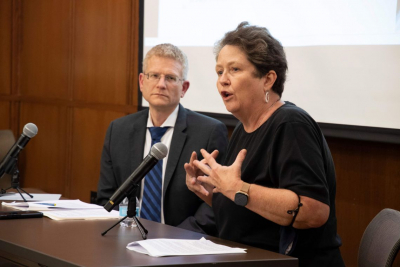 At the start of every school year, cultural anthropologist and human rights professor Robin Kirk takes an informal snapshot of her students’ values.

Barring violence, she asks her classes, what is the worst thing a Duke student could do in this class?

Over the past couple of years, students have listed these worst-case scenarios: being a racist, using the wrong pronouns, and being disrespectful to a person in the class, said Kirk, co- director of the Duke Human Rights Center at the Franklin Humanities Institute.

Twelve years ago, what did students say was the worst thing a Duke student could do in class? “Wear a Carolina T-shirt,” Kirk told an audience of students and faculty on Wednesday, Sept. 7, in a Mellon Sawyer Series discussion on the future of reproductive rights in the U.S.

This example, which elicited a low chuckle from the audience in Rubenstein Library, illustrates how people’s ideas about human rights, including their beliefs about abortion and reproductive rights, evolve over time, she said.

“Human rights are not like the Ten Commandments,” Kirk said. “They weren’t handed down carved in some stone. There has always been, in human societies, a discussion about right and wrong … These are not things that we passively receive. These are things that we envision, and then things that we fight for.”

“The idea of who has rights and how they’re defended changes over time,” Kirk continued in the discussion, which was convened by the Focus Program at Trinity College, an interdisciplinary program for first-semester Duke students. “One of the key things about who gets rights, and how that debate shifts, is that the people who themselves are denied rights begin to speak and begin to be heard.”

Kirk was joined by Neil Siegel, professor of law and political science at Duke Law School. He briefed the audience on the evolution of the U.S. Supreme Court and the political circumstances that created a conservative majority among the court’s justices to overturn Roe.

The Roe reversal was influenced by many factors, Siegel argued – and not one of them was Constitutional law, he said.

“This decision, I daresay, has no basis in the law,” Siegel said. “This decision is lawless and utterly unprincipled. It’s also the law of the land, and we are bound by it until such time as the court’s decision-making changes.”

Rather than applying the law, Siegel argued, the five justices responsible for the Dobbs v. Jackson ruling appeared to attribute their decision to the idea that “abortion is not deeply rooted in American history or tradition,” he said. The justices cite as evidence a 19th-Century social movement to ban abortion. Siegel described the movement differently, suggesting it was motivated only in part in part to protect the life of a fetus, but also “in part to enforce traditional gender roles and to prevent ethnic replacement of our population.”

He summarized the movements of individual states to establish localized laws around abortion access.

“The Supreme Court seemed to think that the federal courts would simply get out of the business of abortion and leave it to the political process,” Siegel said. “That’s not happening at all. There’s plenty of litigation in the state courts… I expect about half the states to either impose total bans with exceptions for the life of the pregnant person, or near-total bans with very limited exceptions.”

Siegel discussed numerous approaches states could use to challenge the constitutionality. He also expects half the states to provide robust access or significant access, he said.

North Carolina, which has outlawed abortion after 20 weeks of gestation, stands out as permissive against the backdrop of the rest of the American South, Siegel said. Mid-term elections in North Carolina this fall could give Republicans the supermajority in the state legislature, which would overrule any veto from democratic governor and could lead to more restrictions, he said.

Siegel cited several plausible challenges to the constitutionality of state laws, particularly the vagueness of many laws that fail to provide adequate legal definitions of life-threatening medical situations under which abortions could be allowed.

It was only a matter of time before a conservative majority took hold of the Supreme Court, Siegel said.

“When you have highly ideological polarized parties, and the Constitution makes nomination and confirmation a political process, eventually it's going to spill over to the courts,” he said. Circumstances may change, he added.

“The Supreme Court is neither infallible, nor final,” he said. “It is not going to have the last word. It can have a very important word, and we are legally bound to comply. But politics more than law is to determine the future abortion rights protections in this country. It is just, in my opinion, a great human tragedy that so many people, especially women, are going to suffer as a result of this decision.”