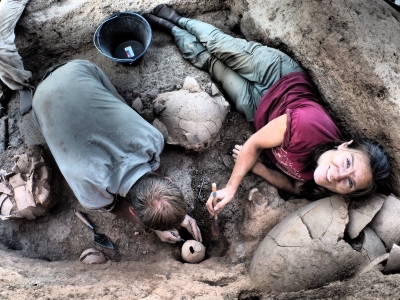 A cluster of new classics professors are expanding our view of the past.

When the 2020–2021 academic year began, Duke’s Department of Classical Studies looked a lot different than it had when the previous year ended. Over the summer, the department welcomed four new professors—a cluster of hires that accounts for nearly 50 percent of the department’s faculty.

Their presence alone is a significant addition to Duke’s classics expertise and teaching, but equally as important is who was hired. The four new professors cover the breadth of the subject. The cluster includes an archaeologist, a historian, and two literary scholars who cover everything from Bronze Age Anatolia to democratic Athens, from Africa during the Roman empire to the fall of Rome and the early Middle Ages.

For all their differences in approach and time period, though, the cluster shares a focus on complicating narrow views of the classical world. They shed light on the experiences of women, diverse religious and ethnic groups around the Mediterranean and ordinary people often omitted from the written record. On top of that, in a field still dominated by men, the hires have flipped the department’s gender balance.

Adding to Duke’s already acclaimed classicists, they make a compelling case for the enduring importance of the field today.

Building on what was

When a batch of retirements provided the opportunity to add four new professors, Classical Studies decided to take a unique approach. Rather than hiring one a year, as typically happens in academia, they hired all four professors as part of a single search.

“When you bring in four people together, you have an opportunity as you’re vetting candidates side by side to see interesting overlaps,” explained Jed Atkins, the department’s chair. “You begin to think not just across traditional boundaries, but you start seeing interest ways in which people can work together. And, when you bring in people at the same time, you have a unique opportunity to cultivate community.”

The new cluster proves the theory. It includes:

The opportunity to ask interesting questions about gender, collective memory, identity formation and other topics not always associated with classics is just what Duke wanted. “We researched and taught a wide range of things already,” Atkins said. “What these hires allow us to do is extend this mixture. The range of expertise that these colleagues bring to the table is impressive: Greek and Roman drama, Roman law, ancient medicine, trauma studies, imperial literature, late ancient history, slavery, Near Eastern archaeology, gender theory—the list could go on. And we’re still going to be able to continue to do the things we’ve already done, but much more richly and consistently.”

For the newcomers, it was that spirit of collaborative inquiry, building on the traditional canon while pushing beyond it, that made Duke an attractive home—especially given the chance to join with three other scholars. “Having the opportunity to collaborate with people who are changing their own fields in different areas is a really exciting opportunity,” Weiberg said, mentioning her colleagues in Classical Studies as well as the Franklin Humanities Institute and similar Duke programs.

The diversity of the classical world

In large part, that momentum includes showing the full picture of the classical world, which was by no means limited to marble statues and white men speaking in the public square. Not only was there a diverse array of peoples and ethnic groups—spanning north Africa to the Arab world and lands along the Black Sea, including what is now Bulgaria and Romania—but all of those cultures intermingled. “We have this idea that things were simple in the past that are complicated now,” Morgan said.

Her research takes direct aim at that mistaken understanding, adding missing complexity. As the assistant director of the Chicago-Tübingen Expedition to Zincirli, Morgan is currently analyzing her findings from an archaeological dig at the ancient city of Sam’al. Using distinctive wine pots she unearthed with her collaborators—an international team of archaeologists, scientists, students and local excavators—Morgan was able to provide evidence that the ancient inhabitants of Zincirli were connected to a series of vast trading networks.

Those findings, along with similar work on textile production tools, help Morgan explore that way identities were formed. “The way we project identity onto the past are not actually the ways that people in the past thought about their identities,” Morgan said. That’s especially true in Anatolia, because the kind of political and economic networks Morgan studies disclose complex cultures. “We get a lot of bi- and trilingual inscriptions. They are very ethnolinguistically diverse regions. Yet they seem to have a very cohesive cultural identity at the local level,” she explained.

Attention to those dynamics also deepens understanding of the forces that shaped the Western world. Casias’ research into early Christianity recovers the role that ordinary people played in forming church doctrine about the family. The bishops who were later thought of as the fathers of Christian theology were, at the time, working bishops serving constituencies across the Roman empire.

“Looking at them as provincial and local administrators shows the way their ideas took shape in response to what was going on in their communities,” Casias explained. Ecclesiastical rules governing the family weren’t the product of solitary great men inventing theories by candlelight, but of negotiations between bishops and community members. And, because “the presence of domestic slaves in the household affected everything from marriages to child-rearing practices to education,” as Casias said, it’s impossible to understand the underpinnings of Christian family doctrines without accounting for the role of slavery in the Roman empire.

What we can learn from antiquity

Because classics was the Western canon for so long, these insights carry particular weight. “The material I study has timeless value that has influenced lots of people,” Ginsberg said. The stories, philosophies and theories we have inherited from antiquity have played an outsized role in shaping how people still think today.

Yet, those ideas come to us from millennia ago, when circumstances were completely different. The stories that have been passed down—like depictions of Nero fiddling while Rome burned, which Ginsberg has a particular interest in—were written in specific socio-political contexts that are often little understood.

The fact that the classical period is both deeply familiar and incredibly distant makes it especially useful for investigating contemporary society, as Ginsberg’s work on the trauma of civil war makes clear. “I see so many parallels to the way modern societies are still fighting with themselves—both literally and figuratively,” she said. Ginsberg examines how Romans memorialized and reckoned with social conflict, finding that “they are an interesting test case because, unlike us, they felt like the passion of civil war never abated. You just had to suppress it, and never stop suppressing it, lest it bubble out and cause civil war again.”

Weiberg’s research engages with similar topics, though in Greece rather than Rome. Currently at work on a book called Theater of the Home Front: Wives of Veterans and War Trauma in Greek Tragedy, Weiberg studies plays that depict not heroic men off to do battle, but the impacts of war on women and their families. “I show that our models of thinking about trauma, as they change, can let us appreciate how concerned the Greeks were with the effects of war and the experiences of trauma,” Weiberg said.

She does the same with gender and sexuality, studying both their presentation at the time and the way Greek literature is used to explore the subjects today in books like Maggie Nelson’s The Argonauts. “I’m interested in the way our own conceptions about gender and sexuality are influenced by the classical tradition, and also how thinking about a very different culture, in terms of sexuality and gender, can help us understand how our own categories are created and constructed by our society,” Weiberg said.

New ways to learn the classics

Even though their first semester has been marked by the COVID-19 pandemic and ongoing protests against racial injustice, Classical Studies’ new faculty cohort has found time to begin collaborating across Duke to make clear the possibilities of the field.

In fact, this time of unrest has given them direction. Morgan’s digs have uncovered monuments that were destroyed and reused as building materials, and she will discuss the long history of building and tearing down monuments as responses to social change in a class next semester called “Seven Wonders: Monuments and Cultures of the Ancient Mediterranean.” That subject mirrors Ginsberg’s interest in U.S. Civil War monuments, given her research on memory and civil war. She may also guest lecture in Morgan’s class. The department will also be hosting a session of Eos READS that will discuss the work of philosopher and post-colonial theorist Frantz Fanon, connecting the classics with contemporary anti-racist discourse.

With so much energy and vitality around connecting the past to the present and the canon to the forgotten, the department of Classical Studies is just beginning to explore what’s possible with their expanded faculty. “One of the things I’m really excited about it is just building together,” Atkins said of the future of the department. “Classics as a field is changing, so the training we offer students looks different now than it did 20 years ago. The types of questions people are asking are changing.”

With four exciting new scholars leading the way, Duke is ahead of the field on the journey back to the past.