Dean Ashby: On Diversity, We Must Lead with Care 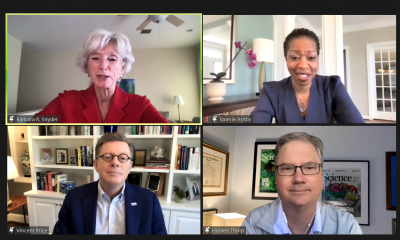 Speaking to the Association of American Universities this March, Dean of Trinity College of Arts & Sciences Valerie Ashby explained that the only way to foster a diverse, inclusive community is to change the way people relate to each other. “Culture change happens at the speed of trust,” she said.

Titled “The Hard Work of Culture Change,” Ashby’s talk was a chance to explain how Trinity has approached diversity and inclusion efforts during her tenure. She was joined by Holden Thorp, editor-in-chief of Science and the former provost of Washington University. Duke University President Vincent Price offered introductory remarks.

Ashby explained that Trinity’s mission is “consistent excellence” and that one of the core values in Trinity is that “diversity equals excellence.” To strengthen that commitment, her team has adopted a “CARE” model of leadership. By centering “Courage, Authenticity, Responsibility, and Empathy,” she said they have built space for people to be vulnerable with each other, admitting the things they don’t know and responding to each other’s needs.

In practice, that has meant building community among Trinity’s underrepresented members, starting with Trinity’s Black faculty. Ashby explained that early in her tenure as dean she met with many Black faculty members to learn about their experiences.

She found that they felt unappreciated, invisible and like nothing would change, so Trinity began hosting events that responded to their needs, including celebrating the 50th anniversary of Black faculty in Trinity. “The community caring for itself is our biggest retention tool,” she said.

But Ashby also spoke to the danger of feeling successful just because you’ve formed a committee, written a report or held an event. “Activities and events are deceiving,” she said. “They feel good and meaningful, but they aren’t structural change.” So Trinity also began examining issues like how many Black faculty had been named distinguished professors, changing practices to ensure equity.

Once protests erupted around the country after George Floyd’s death this summer, efforts across Trinity accelerated. Departments extended Ashby’s efforts and focus on diversity and inclusion, putting them in practice across the college. That support has been essential, Ashby said: “Culture change that is faculty-owned and faculty-led is culture change that lasts.”

Speaking about Living While Black, a day-long, Duke-wide symposium last summer, Ashby reflected during her AAU talk on the fact that Black faculty navigate racism and race-based assumptions every day. She related her own experience being asked for help with flowers in Whole Foods, despite the fact that she was dressed in all Duke apparel. “That’s the weight our colleagues carry, so it’s wonderful to recognize that they are carrying it,” she said.

Ashby also explained that Trinity is focused on all types of diversity. “When I say diversity, people automatically think it’s the kind of diversity they like. But I mean diversity in all its forms,” she said. In particular, she added that the university must also focus on the needs of the Asian-American and Latinx communities, and that conservative students must have space to voice their opinions.

Building trust is something everyone can participate in, Ashby emphasized. She noted that she had nothing in common with her Ph.D. advisor, Joseph DeSimone, who remains her mentor to this day. He was a white man who was a first-generation college student, while she is a Black woman who was not first-generation. But he was the person who taught her that diversity equals excellence if you want to advance scientific discovery. “You need that difference in perspectives,” she said.

Even with wide support, though, Ashby cautioned that the road is a long one. “We didn’t get here overnight, and we won’t get out overnight,” she said. The important thing is having commitment. “We all have to show up automatically believing in the fullness of the mission, and take consistent steps forward,” she added.

In response to an audience member’s question about student protests, Ashby explained that she was faced with them regularly early in her tenure as dean. She tried to meet with students individually, she explained, and eventually built strong relationships with many of them. “They were angry and didn’t want to talk at first,” she said. “But one student still texts me to this day.”

Their demands focused on hiring new, more diverse faculty who specialize in underrepresented areas. The college is currently hiring a number of positions focused on African, Asian-American, Latinx and Native American scholarship as a direct result, Ashby said.  “Some of them started by yelling, but that’s because some had been speaking quietly and no one listened,” she added.