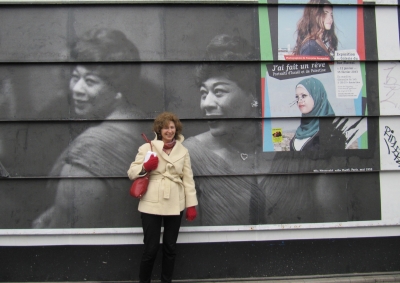 In 2011, at the unveiling of a highway marker honoring Pauli Murray — the lawyer, priest, civil rights advocate, and Durham native — Helen Solterer began a literary journey through time and place.

It was there that Solterer, a professor of Romance Studies, first learned of Murray’s poetry. Solterer was particularly struck by Murray’s 1944 poem “Dark Testament,” calling it Murray’s “freedom song” about “the curse of lynching in North Carolina.” It’s a stunning work of literature in its own right, and Solterer also heard a familiar voice through it.

“It’s clear to me,” Solterer said, “having looked at her archives, but more importantly listened to her poetic voice, that she knew her François Villon. She knew his Testament.”

Villon was a French poet who composed the Testament, a fictional piece contemplating a hanging, around the time that he was serving a prison sentence in Meung-sur-Loire, France. But what’s especially notable is that it was in 1461. Solterer recognized his pre-modern ballad in Murray’s protest against Jim Crow violence. But it wasn’t the first time it had happened. Solterer had a similar flash of recognition as a graduate student in Canada in the 1980s while listening to the “Ballad of the Hell-Hound” by exiled Hungarian writer György Faludy — who translated Villon in 1937.

The connections between Villon, Murray and Faludy are an example of what Solterer calls Timely Fictions, which is also the working title of her ongoing research project. On April 9, she was awarded a 2020 Guggenheim Fellowship to fund her work. “I am honored and delighted.” Solterer said. Duke Chemistry professor Michael Therien was also named a Guggenheim fellow.

Solterer works in French-language literature and history, particularly the Medieval and Renaissance periods. But she says those labels can be misleading. “In the humanities, we tend to talk about classics — works coming to us from long ago and far away,” Solterer explained. “I’ve always felt uncomfortable with that. It gives us a sense that these works are suspended, out of time, disconnected. What I’m continuing to probe is the idea that works call out to us for very particular reasons at particular times and in wide, diverse contexts that are in fact radically different from the original community in which a work or fiction was invented.”

Her focus now is building a model to show how works of fiction do that, using specific test cases in French and Francophone literature. In addition to Villon, Solterer will include figures like Christine de Pizan, a writer who was born in Venice in 1364 before working for various patrons, including the French King Charles VI, during a time of massive social upheaval and civil war. “She was a visionary for imagining and thinking about the equity of women’s labor,” Solterer said.

Five centuries later, French novelist and journalist Édith Thomas rediscovered de Pizan’s work during the Nazi occupation of France — another period of upheaval during which the workforce was being reconceptualized and women were gaining the right to vote. By examining the ways Thomas mobilized de Pizan’s work to campaign for political and economic equality, Solterer tracks how activists and other public figures can make use of pre-modern works of literature in their fight for humanitarian values.

Solterer is approaching her own work in a similar vein. Though the fellowship will allow her to devote the next year to writing, she stresses that it won’t be in solitude. “I see the book I’m making as a medium and conduit in what is for me always debates, dialogues, encounters and exchanges.” Solterer added that she is thinking of Timely Fictions as a kind of almanac and she will experiment with digital designs for the work in order to ensure those encounters can take place with broader publics, as well.

“My goal — and it’s a gamble,” Solterer said, “is to rethink our relationship with the experiments, aesthetic provocations of literature, and with the thinking of these generations centuries ago, for what they incited people to create historically, what they invite us to do now.”

Photograph by CL Krueger, showing Solterer in the Belleville neighborhood of Paris.