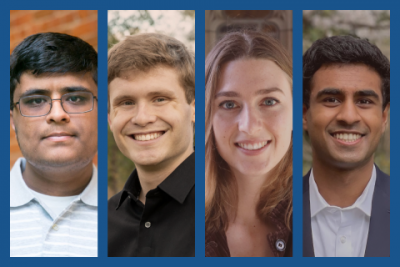 All four Duke University undergraduates nominated for the Barry M. Goldwater Scholarship have won the federally endowed award that encourages students to pursue careers in the fields of mathematics, natural sciences and engineering.

Yasa Baig, John Boom, Grace Dessert and Anish Karpurapu are among the 410 students awarded Goldwater Scholarships on March 26 for the 2021-2022 academic year.

The Goldwater Scholars were chosen on the basis of academic merit from a pool of 1,256 natural science, engineering and mathematics students nominated by the institutional representatives of 438 colleges and universities nationwide. Nearly all of the scholars intend to obtain a doctoral degree.

Baig is an Angier B. Duke Scholar from Foxborough, Mass., majoring in both physics and computer science. At Duke, he has been developing a mathematical and deep-learning-based technique to quantify emergent complexity in bacterial growth dynamics under the mentorship of Lingchong You. Baig is fascinated by questions around how living systems spontaneously generate order out of chaos. He plans a research career in biophysics applying nonlinear and complex systems theory to complex biological systems.

Boom is from Bellaire, Texas, majoring in both biomedical engineering and chemistry. At Duke, Boom has studied nucleic acid structure with a focus on dynamics and small-molecule binding with Professor Hashim Al-Hashimi. Boom plans to obtain a Ph.D. in biological engineering or biochemistry to understand the inner workings of the cell and engineer cells at the molecular level. He aspires to be a professor at the intersection of engineering, biochemistry and medicine.

Dessert is from La Jolla, Calif., completing a self-designed major in neural engineering. At Duke, she has studied the neurophysiology of seizures with Professor Warren Grill, creating computational tools to improve epilepsy localization. Dessert plans to obtain a Ph.D. in biomedical engineering to elucidate neurophysiological processes, and she aspires to be a professor in neural engineering and a principal investigator at the intersection of industry and medicine.

Karpurapu is from Vienna, Va., majoring in both biomedical engineering and computer science. He has worked at Duke with Ravi Karra and is currently focused on developing a stem cell model to study the spatial enrichment of endothelial cells in the presence of cardiomyocytes. In the future, Karpurapu plans to pursue an M.D./Ph.D. degree in stem cell biology to one day lead a team that uses in vitro models to provide biological insights into drug discovery and investigate cell-cell interactions.

“This honor is tremendously exciting for the awardees and for Duke. These students have done outstanding research and have a bright future ahead as scholars,” Provost Sally Kornbluth said. “We wish them great success.”

Since its first award in 1989, the foundation has awarded 9,457 scholarships worth approximately $71 million. Eighty-nine Duke students have won Goldwater scholarships since 1990.

Duke students and alumni can receive support for opportunities like the Goldwater Scholarship from the Nationally Competitive Scholarships team at the Office of Undergraduate Scholars and Fellows.