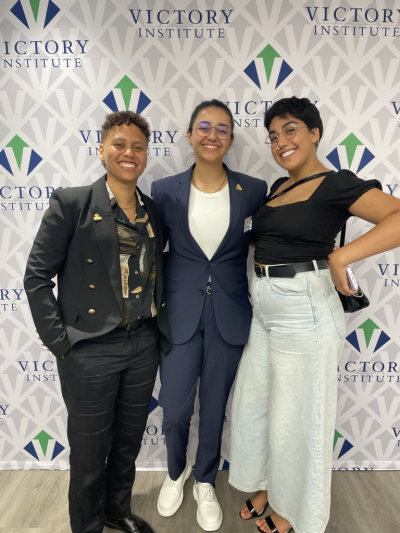 This past summer, Gender, Sexuality & Feminist Studies minor Ila Amiri got chance to be in the room where it happens.

She was there as a part of the Victory Congressional Internship, which aims to introduce LGBTQ+ undergraduates to public policy and prepare them to be the next generation of leaders. Amiri spent eight weeks in Washington, D.C., networking, learning how to craft legislation and narrowing down what she wants out of her own postgraduate experience.

The third year student learned about the opportunity when she applied to Duke and was overjoyed when she was accepted to both Duke and the internship. She was assigned to the office of Representative Ritchie Torres (NY-15).

While serving in the office of Democratic Representative Ritchie Torres (NY-15), Amiri had the opportunity to workshop a bill proposal with the rest of the congressman’s staff before presenting the idea to Torres himself.

“People work their whole lives to be given this opportunity, and it was being handed to me on a silver platter,” Amiri said. “I was overwhelmed with possibilities, but it took very little time to land on my bill idea.”

Amiri focused on gun violence at concerts and music festivals, citing the death of pop singer Christina Grimmie, who was gunned down at her own concert at a meet and greet in 2016. “So much life and potential were stripped away because the small music venue she played at didn’t have proper security measures in place, like metal detectors, to stop a man with two guns and a knife from stepping foot near her,” said Amiri.

“This bill has lit a fire in me through just the pure possibility of something I initiated enacting potentially life-saving change across the country,” Amiri said. “It was within the process of workshopping this bill that I finally felt like the work I was doing was worthwhile, rewarding, and could make a difference.”.

In addition to getting a front row seat to the world of policy making, Amiri got to attend networking events and speak with many openly LGBTQ+ politicians and government staff members.

A highlight of these events was meeting Speaker Nancy Pelosi and Senator Bernie Sanders, Amiri said.

She has been excited to bring her real-world experience in politics back to Duke this semester.

“I have a new passion for what I can accomplish as one person,” she said. “My experience with GSF intersecting with my major in Public Policy prepared me for many conversations regarding sexuality and gender in relation to policy and the nuances that lie within them.”

Amiri feels strongly that her GSF minor is an asset as she continues to explore her potential career in politics and law, and is hoping to pursue law school after she graduates.

“You can find ways that the subject matter within the GSF major or minor is truly in everything and can be applied to anything,” she said. “The ways in which gender and sexuality influence our world and every field are boundless. Bring your unique and valuable perspective into any career you wish to pursue postgraduation.”