The Language Studies Program That United Carolina and Duke 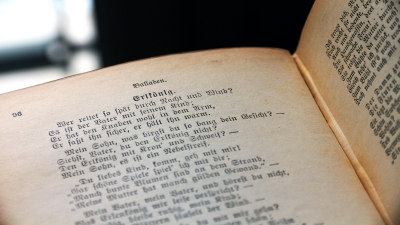 This story was first published by the University of North Carolina.

Carolina and Duke may have a heated rivalry on the court, but there’s more collaboration than competition when it comes to academics.

The Carolina-Duke Graduate Program in German Studies utilizes the strengths of the two universities — one public and one private — to offer graduate students at both institutions an unparalleled experience.

The program grew out of the collegiality that has long existed between the German studies programs at both universities, as evidenced by their shared Works in Progress series — meetings where colleagues present their work for feedback — and graduate students’ ability to take certain classes at either institution.

As the broader impact of that cooperation became clearer, it only made sense for the universities to do something larger — something more official. “It occurred to us that it would be an incredible idea to try to formalize this process and to really pool the resources of these two great universities,” says Eric Downing, chair of the Department of Germanic and Slavic Languages and Literatures at UNC-Chapel Hill, who has been with the program since it first launched over a decade ago.

It took some time — officially bringing both programs under one umbrella was no small task — but eventually, the Carolina-Duke Graduate Program in German Studies formally came to fruition in 2009. It’s now one of the most respected German studies programs in North America. “Duke has its own reputation as being a stellar institution, and UNC has a similar world-class reputation,” says Downing. “To be able to tell prospective students that we’re able to combine these in meaningful ways, it’s a pretty easy argument to make.”

As a result of the program’s size, students have more faculty to work with. Whereas most graduate German studies programs may have one faculty member working in a particular period, say Romanticism, Carolina-Duke can quadruple that. “The benefits are really clear. It’s fantastic for the graduate students because they get different perspectives within their individual strengths, but they also get a wider view of the field at large,” says Engelstein.

They’re also able to work with faculty outside of German studies at both institutions, which fosters the interdisciplinary approach that the program encourages. “The student is able to explore a much broader spectrum of approaches to the particular material that they are most interested in,” says Downing.

Graduate students such as Leonie Wilms are drawn to the program by the extensive resources available to further their research goals. “Having resources, especially in terms of libraries, that’s an immense advantage,” says Wilms, who focuses on German theatre and drama.

The program also offers students the chance to teach at both a public and a private institution — a rare opportunity that better positions them when they hit the job market. “Every university functions differently, but I think having a broader degree of experience is probably to my benefit in the long run,” says Nathan Drapela, a graduate student in the program who studies 19th– and 20th-century novels. Wilms says it’s been immensely helpful to teach students at Carolina and Duke, and “learn how to adjust your teaching style.”

All of those perks ultimately help promote an exchange of ideas and build comradery. “There’s a really strong sense of community and support. The rapport between faculty and grad students is really awesome. I have a great connection with a lot of professors,” Wilms says.

Fostering those relationships is a point of pride for the program’s leaders.

“Graduate school can be a very stressful experience, and I think we do a wonderful job of making sure that the joy of graduate school always comes through,” says Downing.