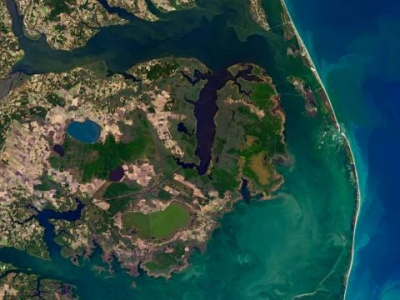 DURHAM, N.C. -- Emily Ury remembers the first time she saw them. She was heading east from Columbia, North Carolina, on the flat, low-lying stretch of U.S. Highway 64 toward the Outer Banks. Sticking out of the marsh on one side of the road were not one but hundreds dead trees and stumps, the relic of a once-healthy forest that had been overrun by the inland creep of seawater.

“I was like, ‘Whoa.’ No leaves; no branches. The trees were literally just trunks. As far as the eye could see,” said Ury, who recently earned a biology Ph.D. at Duke University working with professors Emily Bernhardt and Justin Wright.

While these “ghost forests” are becoming a more common sight in North Carolina’s coastal plain, scientists had only a rough idea of their extent. Now, satellite images are providing new answers.

In a study published April 4 in the journal Ecological Applications, a Duke-led team mined 35 years of satellite images of a 245,000-acre area in the state’s Albemarle-Pamlico Peninsula.

The images show that, between 1985 and 2019, 11% of the area’s tree cover was taken over by ghost forests. Instead of mirroring the gradual pace of sea level rise, most of this spread occurred abruptly in the wake of extreme weather events such as hurricanes and droughts, which can concentrate salts or send them surging into the region’s interior.

The study focused on the Alligator River National Wildlife Refuge, which was established in 1984 to protect the area’s unique forested wetlands and the endangered red wolves, red-cockaded woodpeckers and other wildlife that live there.

Here, the Duke team is monitoring what Bernhardt and other researchers call “the leading edge of climate change.”

From 1900 to 2000, the sea rose about a foot in this part of coastal North Carolina, faster than the global average. By the end of this century, it could rise two to five feet more.

Shrinking shorelines dominate most discussions of sea-level rise, as oceans submerge coastlines and chew away at beachfront property. Yet less talked about is what’s happening farther inland.

Long before beaches shrink and disappear under the rising sea, seawater starts creeping into low-lying regions.

Most of the Alligator River National Wildlife refuge sits less than two feet above sea level, “which makes it all the more vulnerable to sea level rise,” Ury said.

Add to that the hundreds of miles of ditches and canals that crisscross the region. Built during the mid-1900s to drain water out, they now act as a conduit for seawater -- which is about 400 times saltier than freshwater -- to flow in.

With no barriers in the way, seawater gets pushed inland through these channels, leaving its salty fingerprints on the soils. As the salt moves in, it draws water out of plant cells and strips seeds of their moisture, making it harder for new tree seedlings to sprout. Salt-sensitive tree species first fail to reproduce and eventually die off, as freshwater forest turns to salt marsh.

Using pictures taken by 430-mile-high Landsat satellites, the team was able to map the spread of ghost forests in the refuge over time.

Each pixel in the satellite images represents the wavelengths of light bouncing off the Earth below, in an area on the ground roughly the size of a baseball diamond.

The team fed the satellite images to a computer algorithm, which in turn analyzed each pixel and determined whether it was dominated by dominated by pines, hardwoods, shrubs, grassy marsh, open water or dead trees. Any pixel with as many as 20 to 40 visibly dead trees present at once was labeled as ghost forest.

The view from space changed over the 35 years of the study.

More than three-fourths of the study area was covered in trees in 1985. Since then, even without any logging or development, the refuge has lost more than 46,950 acres of forest, or a quarter of its 1985 tree cover.

More than half of these losses occurred in the interior of the refuge, more than a kilometer from any coast, the study revealed.

“It's not just the fringe that's getting wetter,” Ury said.

Of the more than 21,000 acres of ghost forest that formed between 1985 and 2019, the most noticeable die-off was in 2012. The area had just endured a five-year drought and then a potent strike by Hurricane Irene in 2011, when a 6-foot wall of seawater was pushed ashore. The storm surge swept across the refuge, cresting over Highway 264, more than 1.2 miles inland from the coast. Within months, entire stands of dying and downed trees were visible from space.

What is happening in eastern North Carolina is happening elsewhere, too, the researchers say. In coastal regions across the globe, saltwater is starting to reach areas that haven’t seen it before, even reducing crop yields and jeopardizing freshwater aquifers that people rely on for drinking water.

The Duke team is collaborating with other researchers to expand their study to other parts of the Atlantic and Gulf coastal plains, from Cape Cod to Texas.

“Because of its geological location, North Carolina is just ahead of other coastal areas in terms of how far sea level rise has progressed,” Ury said. “Lessons learned here could help manage similar transitions in other places,” or pinpoint areas that are likely to be vulnerable in the future.

Funding for this research was provided by a NASA Earth and Space Science Fellowship (80NSSC17K0355), the North Carolina Sea Grant/Space Grant (R/MG -1806), the National Science Foundation Coastal SEES program (1426802), and by the Duke University Data+ Program through the Rhodes Information Initiative.