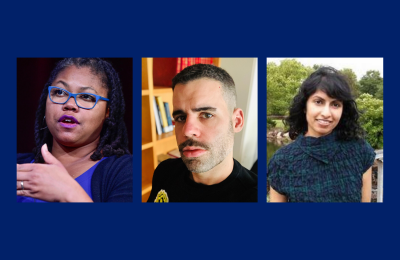 Bold thinking is an essential part of Duke’s approach to scholarship, and three ongoing projects show the unexpected results.

Adriane Lentz-Smith, Gabriel Rosenberg, and Aarthi Vadde have been named 2020–21 National Humanities Center Fellows. They will spend a year away from their regular teaching duties as resident scholars at the Research Triangle Park–based center, researching and writing new books. Chosen from 673 applicants, they join 30 other humanists from the U.S. and four foreign countries working in 18 different disciplines.

Here are the books they’re working on.

The Slow Death of Sagon Penn: State Violence and the Twilight of Civil Rights

In 1985, a Black San Diego resident named Sagon Penn was pulled over by the police. The encounter quickly turned violent. Fearing for his life, Penn shot and killed one officer while wounding another and a civilian who was riding with them.

Penn was charged with murder, and his trial highlighted the rampant racial tensions of 1980s southern California, which would explode with the assault of Rodney King six years later. Though he was eventually acquitted, Penn’s life deteriorated. He was later arrested on charges of domestic abuse, among other things, and, in 2002, he committed suicide.

“The basic story itself is riveting and heartbreaking,” said Adriane Lentz-Smith, whose project, The Slow Death of Sagon Penn: State Violence and the Twilight of Civil Rights, centers around the case. “It has you think about the ways in which state violence becomes more personalized types of violence and travels throughout a community, touching all kinds of folks.”

By writing about Penn’s life in the era of Black Lives Matter, Lentz-Smith, an associate professor of History, hopes to provide historical context to now familiar debates about policing and racism. “The Civil Rights Movement didn’t begin with Brown vs. Board nor end with the Voting Rights Act,” she said. She will use Penn’s experience to connect individual victims of state violence to the national history of policing, border policies and white supremacy, showing how the struggles of the Civil Rights Movement continue today.

Approaching the topic this way also allows Lentz-Smith to humanize the issues. “When you make it not an abstract debate, but a life that we see destroyed, that takes his loved ones and his children with it — – to see it as tragedy, and not just an individual tragedy but America’s — that seems significant,” she said.

Purebred: Making Meat and Eugenics in the Modern United States

According to Gabriel Rosenberg, associate professor of Gender, Sexuality & Feminist Studies, if you want to understand why eugenics and race science were widely popular in the United States in the early 20th century, you can’t just look at intellectual debates over the theory’s scientific merits (or lack thereof). The actual answer, he says, can only be found on farms.

“There are really intriguing and interesting institutional ties between eugenic organizations and the livestock breeding industry,” Rosenberg explained. “This is a well-known empirical fact about the history of eugenics, but it’s often sidelined as a peculiarity.”

Rosenberg aims to make it central, because that’s what it was at the time. In the early 1900s, most Americans lived in rural areas, surrounded by farm animals. In fact, in 1900, the nation’s livestock was worth more than the country’s railroads combined. The only asset worth more at the time was land.

As a result, eugenics — the practice of selectively mating people with specific hereditary traits — was a familiar idea, Rosenberg argues. Many accepted the theory because it mirrored the way they bred their livestock. All that was needed was to apply the same logic to humans — with horrific consequences.

By placing farming practices into the history of eugenics, Rosenberg is also making broader arguments about the forces shaping our world. “The practice of making meat at these truly world historical levels is reformulating human social relations with each other, fundamentally restructuring human societies,” he said. “We’re creating a new ecology that confines and conditions our own social relations.” In other words, the supply chains and husbandry practices that define how we treat animals and nature also define how we treat ourselves.

We the Platform: Contemporary Literature after Web 2.0

By turning to popular digital forms of writing, associate professor of English Aarthi Vadde is taking questions typically asked by scholars of Internet culture and examining them with a literary lens. The new perspective raises the very question of what makes writing literary, asking what impact its form and venue of publication have — even the device on which it’s read.

Vadde points out that while curling up with a good book is still many readers’ ideal way to consume literature, it’s not the predominant mode of reading in the 21st century. “I didn’t feel like enough people were talking about the actual sociological circumstances of the way literature is consumed today,” Vadde said. “You can’t assume that people are reading the physical book. And if they are reading the physical book, you still have to take into account the ecology that the book exists in.”

That ecology is defined by the Internet. We spend most of our reading time on digital devices, reading not just news articles and e-books, but social media posts, reviews and other kinds of everyday writing. And writing them ourselves. “Writing is eclipsing reading as a literacy skill,” Vadde said. “It’s so important to write in all areas of work and play these days. That’s something that is very different than the old idea of the reader and writer having a very clear boundary between them.”

Titled We the Platform: Contemporary Literature after Web 2.0, Vadde’s project examines how the “social web” is changing the relationship between literature and literacy, or “the broader understanding of how people read and write today.” She will examine works of literature that probe the conditions of reading and writing, make creative use of digital platforms and reflect upon the computing technologies shaping our interaction with all kinds of art, including Teju Cole’s Twitter fiction, Jarett Kobek’s self-published satire I Hate the Internet and more.

In doing so, Vadde will analyze how the principles and rhetoric of Web 2.0, alongside its tech, influence the form and circulation of literature.

“Learning to use digital tools is not enough,” she said. “Humanists should more pointedly address the philosophies behind those tools. We the Platform will show how literary works and humanistic criticism can play key roles in the dialogue on responsible computing.”