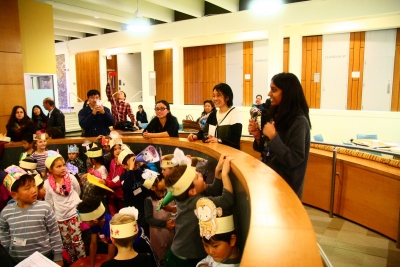 The U.S. State Department’s School of Language Studies categorizes languages according to how difficult they are for native English speakers to learn.

There are four languages in Category IV, the highest: Arabic, Chinese (including Mandarin and Cantonese), Japanese and Korean. They typically require 2,200 class hours before a language learner reaches “professional working proficiency.”

Those languages are very different, including distinct grammars, writing systems and cultures. Yet all 10 of them are included in a single department at Duke: Asian & Middle Eastern Studies.

“We have very difficult languages from six different language families,” said Department Chair Shai Ginsburg. Yet the department includes leading faculty in all of them, acclaimed for their “cutting-edge” language teaching. They’ve published two textbooks this year alone. Their expertise and varying approaches allow students to experience the joy in mastering something challenging and drawing insight from a broad array of peoples.

When Lecturer Kusum Knapczyk teaches Elementary Hindi, she starts with the written script. It can be intimidating to new students of the Indian language to learn a whole new way of writing. But within six classes, they’ve got it.

But Mandarin Chinese requires so many characters—according to the BBC, you need to know thousands to be able to read a newspaper—that at many schools students focus almost exclusively on oral communication in the 100 level. At Duke, though, students learn to read and write with at least 600 Chinese characters in their first-year classes.

“We first build their conversation skills to make them confident that they will succeed, then we introduce more difficult characters and grammars in the 200-level classes,” explained Yunchuan Chen, an assistant professor of the practice and director of undergraduate studies for the department.

There’s yet another approach in Arabic. On the first day of his introductory classes, Associate Professor of the Practice Mbaye Lo tries to get his students to understand that learning to speak Arabic means learning a whole different way of thinking.

“It’s a very rational and conceptual language,” he said. “It’s a different world. If you just want an easy journey, this is not for you. But if you want a beautiful journey, a very enriching journey that pushes you beyond your comfort zone and that has tangible returns—that is Arabic.”

What unites the department is a shared focus on cultural communication, something especially important for Asia and the Middle East. Languages like Hindi don’t have many textbooks on the market with culturally rich readings for adult learners, so the Knapczyks tried to introduce them in their recent book Reading Hindi: Novice to Intermediate.

“A lot of language teachers when they start out think they can just teach from a bunch of children’s books,” Peter said. “We tried to take some adult-oriented themes like dowries, caste discrimination, stories from different economic classes and religious backgrounds to give glimpses of the issues people are dealing with in their day-to-day life.”

“It’s helpful for them to understand the history, problems and thought processes of the Indian people,” Kusum added. “We talk about how to use the language—what is the product, practice and perspective.”

Kun Shan Carolyn Lee, a professor of the practice who directs the Chinese Language Program, attempted the same in Acting Chinese: An Intermediate-Advanced Course in Discourse and Behavioral Culture, a book she published with four other scholars in September. “The idea is that language teaching should be all about helping students learn to communicate with people who speak the language,” Lee said.

But doing so requires more than grammar and vocabulary: it means recognizing the “speech codes” of native speakers, including their axioms and proverbs, the context in which they use certain phrases and how native speakers change their language based on their interlocutor’s gender, social status, occupation and other factors.

In other words, it requires “cross-cultural competence,” Lee said. “We help students explore the belief systems, values and philosophies behind the speech codes” by focusing on the daily, lived forms of behavioral culture that become apparent in how people speak.

Lo’s challenge in the Arabic Program is much the same, though with the added twist that Arabic has long been emphasized for national security reasons. While that means there are more Arabic resources than there are for other Asian & Middle Eastern Studies languages—including funding and textbooks—they are shaped by military interests, preventing students from gaining a full understanding of Arabic language and culture.

In his own book, last year’s The Arabic Context: Context, Text, and Learners, Lo explored “the ramifications of decades of this limited understanding of Arabic.” Bringing those ideas to Duke, Lo shows his students the joy of Arabic, not just its use for American national interests. “We try to compensate them with new discoveries and the beauty of the language,” Lo said.

The department is home to so many cultures that it creates new exchanges. Not only do the faculty share ideas, activities and pedagogical developments from their areas through regular workshops and talks, but their classrooms represent the diversity of the department.

An annual Hebrew-Arabic night takes the intersection of those cultures out of the context of the Israel-Palestine conflict. The Knapczyks’ classes often include Indian students who may be native Urdu speakers learning Hindi, and Lee’s contain heritage speakers whose parents—coming from China, Hong Kong, or Taiwan—speak Chinese.

With their emphasis on cross-cultural communication, those interactions help everyone. “I really enjoy the contrast,” said Chen, a native Chinese speaker who coordinates the Japanese Program, referring to his classroom mix of heritage speakers, English speakers and international students from Singapore. He asks students to lead discussions in Japanese about social issues in their homes—like the education system or wedding traditions in Singapore.

“I think it’s very important for instructors to know what the student already has,” Chen explained. “As an instructor, I don’t know anything about Singapore either, so it’s also a learning process for me. But you can create an environment where they can communicate in an authentic way.”

By allowing those interactions to flourish, students don’t just learn a new language—or even a new alphabet. They get access a whole new way of seeing the world.