When Modern Calligraphy Is Paired with Ancient Scripture 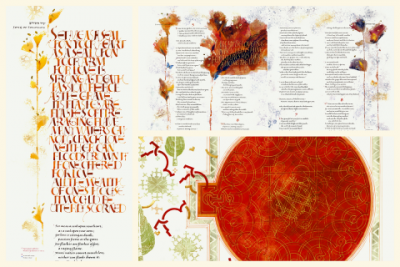 Jonathan Homrighausen was so moved when he first saw The Saint John's Bible as a student docent in Santa Clara University’s archives and special collections, he wrote his own book about it. And then another.

A modern illuminated manuscript, with the last page completed in 2011, this Bible was created by a team of scribes and illustrators commissioned by Saint John’s Abbey and University.

Homrighausen's first book about The Saint John’s Bible focused on its illustrations, but he wanted to spend more time with the letters themselves.

“When I was a docent, people would only ask to see the images. They were less interested in the words, even though the text is handwritten and took years for a whole team of people to scribe it,” says Homrighausen, now a doctoral student in Duke’s graduate program in religion.

His second, most recent book, “Planting Letters and Weaving Lines,” examines the calligraphy comprising The Saint John’s Bible. It focuses on the Song of Songs, a biblical collection of love poems.

“The Saint John’s Bible led me down this rabbit hole of contemporary calligraphy and lettering arts,” Homrighausen says. “I realized that I needed to be able to articulate how to look at the lettering, not just the images.”

Q: How do you describe The Saint John’s Bible to someone who is unfamiliar?

The way that the people who created The Saint John’s Bible describe it is “America's Book of Kells.” So, it's an illuminated manuscript, which means it's written by hand and decorated with gold and color. And it's the entire Catholic Bible.

It was created jointly between the Benedictine monks of Saint John's Abbey in Minnesota, famed British calligrapher Donald Jackson, and a team of artists and scribes that he oversaw.

It's this sort of massive project of arts, scholarship and religion. It’s also this re-creation of something very medieval that has not been done on this scale in centuries.

There are over 1,100 pages of vellum, and the pages aren’t bound. The pages are sent out on display in traveling exhibitions, and they have a gallery at Saint John's Abbey.

Q: What can The Saint John’s Bible teach us about art or calligraphy?

All too often, we think of the Bible or sacred text as some sort of thing that exists in the ether or just handed down from God. The Saint John’s Bible helps us also see that a sacred text always exists as a material thing, created in a certain place, for a specific community and its needs.

In manuscript culture – before the world became digital – it was always individuals, through their own labor and sweat, having to create these things.

So, part of what The Saint John’s Bible teaches us is the way that an object ties us to a whole community, to a history of something that is very localized and specific, rather than something mass-produced. Many of the images in this Bible depict buildings from Saint John’s, especially in Acts which tells about early Christ-followers.

On a more aesthetic level, The Saint John’s Bible is a modern statement of a 2,000-year tradition of beautiful Roman alphabet lettering, drawing on the heritage of scribes going all the way back to ancient Rome. The scribes who wrote The Saint John's Bible studied these earlier inscriptions, such as the Trajan column in Rome. All that history is there.

Q: What does the Song of Songs tell us about Christianity or religion?

The Song of Songs is a book of dialogues between two lovers, a woman and a man. For many, it’s a bit startling and surprising that it's even in the Bible. Some have argued there's a lot more mutuality and less hierarchy between the man and the woman than in much of the rest of the Bible.

For two milennia, Jews and Christians have read the Song of Songs as not just about human love, but about the relationship between God and humanity. All this allegorical interpretation is part of the book’s history and present.

In the modern era, I would say many Christians don't spend much time with the Song of Songs. It barely features in the lectionary systems, or collected scriptures for services and lectures, used by Catholics and many mainline Protestants.

But in The Saint John's Bible, this book has more visual treatment per page than any other book of the Bible. This is not accidental. The monks are alluding back to the medieval monastic tradition of reading the Song of Songs as one of the most beloved and important books of the whole Bible.

The Song of Songs also employs many metaphors and images to describe the bodies of the lovers, such as agrarian metaphors and textile imagery.

I use these metaphors to look at the lettering itself. For example, take textiles. When you look at a column of writing, the letters are visually stitched together. The block of text has a texture, has a warp and a weft. This helps us understand what makes letters beautiful.

And even in the English language, we have these associations of text, textile and texture. So even going all the way back to Latin, the etymology links these words together.

The aesthetic of the pages provides a very different reading experience. There's a lot of white space, a lot of marginalia, and a lot of attention to how it looks. The whole project is a kind of material, theological statement of the Christian theology of “Word made Flesh.”

The Saint John’s Bible is the same Bible, it has the same words, but it's literally made flesh ­— written on animal skin. The woman in the Song of Songs declares that “love is strong as death.” This Bible, this labor of love, required death. Even the material resonates with meaning.

Many non-Christians have found themselves intrigued by this project. That was what the creators of The Saint John’s Bible wanted. They wanted it to be something that would bring people together and start conversations, rather than something that was only for people who go to church.

For me personally, I am very inspired by the Jewish-American artist Ben Shahn, whose book “The Shape of Content” declares that “form is the embodiment of content.” That has guided a lot of my work on writing about lettering arts, showing how the looks of letters, and even all the process of creating the letters — all that relates to what the text means. Shahn was also an accomplished lettering artist (see his book “Love and Joy about Letters”). Letters are not just ciphers to be decoded, but visual shapes to love.

If there’s one thing I would say, it’s this: How do you look at calligraphy? How do letters communicate in their shapes and colors and arrangement? How do they feel? Calligraphy is so much more than its Greek etymology, “beautiful writing.” Calligraphers are often very attuned to texts and engage those texts deeply as they write. My example is biblical text, because I'm a scholar of religion, that's what I know and what I do. But you could apply this to so many other things.

There's such a huge and beautiful body of work going on in contemporary calligraphy and lettering arts. And I think it's under-known and under-appreciated. I hope my book helps people find new ways of seeing it.

Set Me as a Seal Upon your Heart, Donald Jackson, © 2006. The Saint John’s Bible, Saint John’s University, Collegeville, Minnesota.  Scripture quotations are from the New Revised Standard Version of the Bible, Catholic Edition, © 1993, 1989 National Council of the Churches of Christ in the United States of America.  Used by permission.  All rights reserved.

Song of Solomon 6:3, Special Text Treatment, Donald Jackson, © 2006. The Saint John’s Bible, Saint John’s University, Collegeville, Minnesota.  Scripture quotations are from the New Revised Standard Version of the Bible, Catholic Edition, © 1993, 1989 National Council of the Churches of Christ in the United States of America.  Used by permission.  All rights reserved.

Garden of Desire, Donald Jackson, ©2006 The Saint John’s Bible, Saint John’s University Collegeville, Minnesota, USA.  Scripture quotations are from the New Revised Standard Version of the Bible, Catholic Edition, © 1993, 1989 National Council of the Churches of Christ in the United States of America.  Used by permission.  All rights reserved.