Always in Motion: 50 Years of Black Studies at Duke 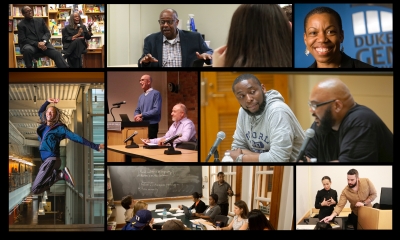 In February of 1969, more than 50 student members of the Afro-American Society at Duke University entered the Allen Building and staged a takeover of administrative spaces. Their demands varied, but first on the list was “the establishment of a fully-accredited department of Afro-American Studies.”

The university had admitted its first black students just six years earlier. Against a national backdrop of social change and racial tension, the student protestors felt they had exhausted the proper channels. And their actions made an impact.

The academic unit known today as African & African American Studies was created one year later. In the 50 years since, generations of scholars have continuously advocated for the department, growing the discipline, advancing others, offering Duke students new methods of analysis, and providing a home for leading voices on communities within the African diaspora.

In this oral history, Duke scholars reveal how the discipline has evolved over time, and the potential they see for a wealth of vital scholarship still to come.

What’s in a name?

At its outset, African & African American Studies faced more than the ordinary challenges of a new program. Cultural and ethnic studies programs were still in their infancy, so the department’s faculty also had to fight for full recognition and autonomy.

“(When I was appointed chair) the program was ‘Afro-American Studies.’ I remember telling the Academic Council that heading a program with the name of a hairstyle I once wore was too informal.

“‘Program’ was suited to our interdisciplinary identity as a unit that drew faculty from Political Science, Literature, History—both Social Sciences and the Humanities. (But) the critical difference was units that were able to hire their own faculty vs. units whose appointments had to originate in programs or departments with tenure track lines. Our effort was to achieve the latter autonomy, our own faculty lines, rather than be dependent on the good will or interest of another department or program.

“As a leader, my goal was to make apparent its academic and scholarly integrity—which meant educating the Duke community as to an academic program’s critical difference from a cultural center; to separate it from provostial office funding and join it to Arts & Sciences; and to grow the faculty affiliations. Our petition to gain stature that allowed our hiring of tenure and tenure-track faculty received full support from the Academic Council, the provost, the Graduate School and the dean of Arts and Sciences.”

“A transformative moment for me was when I took Wahneema Lubiano’s Toni Morrison course in the spring of 2002. Professor Lubiano introduced me to Morrison’s novels and essays and to the possibility of reading Morrison in conversation with contemporary critical and cultural theory. The course also compelled me to think of black literature itself as a site of theoretical reflection and production. After reading Morrison with Lubiano, I could no longer think blackness apart from gender and class.”

Those interactions only became more numerous over the years, as African & African American Studies continued to grow. But, at core, that growth was only possible because the field’s formalization continued to inspire new thinkers and provide a pathway for great minds to devote themselves to the discipline, as Jasmine Nichole Cobb, Bacca Foundation Associate Professor of African & African American Studies and Art, Art History & Visual Studies, explains.

A future for the field

Assessing the history of African & African American Studies is especially meaningful in 2020, when questions of the Black experience, race relations, structural racism, and promoting diversity play an increasingly visible role in U.S. politics and culture. Mark Anthony Neal, the James B. Duke Professor of African & African American Studies and Chair of the Department, speaks to the role the discipline can play in equipping students—and the broader public—to navigate the challenges to come.

“Institutions face tremendous scrutiny and censure when they fail to embrace diversity. From the vantage point of being among the many departments in the Trinity College of Arts & Sciences committed to preparing students for the world beyond Duke’s campus – where there is a continuous need for diverse perspectives and people – Black Studies helps prepare students for that world.

“Graduates of our department have been able to apply their training with us to work in the fields of medicine, public policy, and law and criminal justice, to name just a few examples. And as the continent of Africa emerges as a collaborative partner for so many global entities, of course there will be a need for journalists, anthropologists, and historians trained in contemporary Africa.”

“As one of the leading Black Studies units in the country, and one that epitomizes the interdisciplinary spirit of Duke – we boast economists, historians, literary theorists, art historians, a choreographer, political scientists, journalists, digital humanists, cultural theorists, social scientists, and a geneticist among our faculty. African & African American Studies is well positioned to continue its impact in the field and beyond.

“Critical to the role has been the willingness of the department’s faculty to be present on diverse media platforms, be it National Public Radio, traditional print media, national talks shows, and, of course, social media.  This part of the mission reflects one of the early concerns of the field: that it remains connected to those publics that don’t always have access to institutions like Duke, while also advocating for increased access.”

What ties all these intersecting approaches and methods together, says Samuel F.C. Daly, Assistant Professor of African & African American Studies, is their commitment to building a better world.

“Historians are bad at predicting the future, but I think the study of Africa and the African diaspora is going to become more urgent in our lifetimes – not only as an academic field, but as a design for living. African philosophy, literature and political economy offer a set of tools that the rest of the world needs more with every passing year. In the last couple of centuries, African societies have found ways to thrive in times of scarcity and political tumult. As those conditions bear down on the United States, I think we’ll find that social theories and political strategies from Africa might help us navigate what comes next.

“I’m sure that black studies will change – it is always in motion. But it will always have an ethical project at its center. Black studies is more than one project, but the thing that most commonly brings us together is a humanistic concern with the politics of difference, and how those politics can be made better.”

The Department of African & African American Studies is marking the 50th anniversary by featuring scholars who were immersed in black studies at Duke.

Admission to the lectures is free and the events are open to the public.