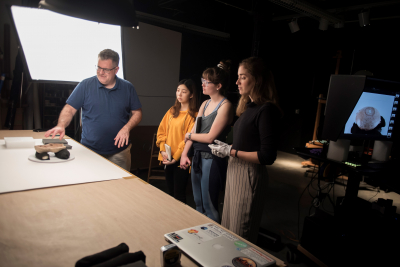 Duke has a long history of combining art and technology, along with many resources to support those efforts. (Photo by J Caldwell)

Sometimes the challenge isn’t finding your passion, but figuring out how to follow it. For first-year student Noelle Garrick, that challenge just got a little easier.

In fall 2021, the Departments of Art, Art History & Visual Studies and Computer Science introduced a new interdepartmental major in Computational Media. The major includes 14 courses — seven from Computer Science and seven from Visual and Media Studies.

“We found that a lot of undergraduate students were already creating their own interdepartmental majors between these two departments,” says Victoria Szabo, research professor of Art, Art History & Visual Studies. “Creating an IDM makes it a little easier for students who want to pursue both degrees to have time to fit all the required classes into their four years at Duke.”

Garrick, a visual artist who was part of her high school’s Art Honors Society leadership team, welcomes the new option. “I took a gap year with the first Duke Gap Year Program cohort,” she said. “I’d never been out of the U.S. before, but I spent 10 weeks in Indonesia as a computer skills teacher. I came to Duke knowing I wanted to combine my interests in art and computer science, but I wasn’t sure exactly how.”

Navigating the largest major at Duke

“Computer Science is the largest major at Duke,” says Susan Rodger, director of undergraduate studies and professor of the practice of Computer Science. “A lot of Comp Sci students are looking for ways to apply their knowledge. We’ve been creating IDMs in collaboration with other departments to help them pursue their interests across disciplines.”

What is computational media?

“Computational media encompasses what we’re familiar with as digital media, but it’s broader,” says Szabo. “It includes procedural logic and all the thinking and theoretical aspects of computing that pre-date today’s digital computers. Computational media takes into account questions of aesthetics and how societies respond to art that is created through the use of digital tools.”

To bring out those elements, the IDM combines the theoretical and the practical, drawing on Duke’s long history in the field. Juniors and seniors conducting research projects and building their portfolios will find a myriad of resources already in place, including a 2007 Mellon Foundation grant to support Visual Studies.

“The grant drew faculty together who were interested in the intersections between technology and the arts,” says Szabo. “The CMAC (Computational Media, Arts & Cultures) Labs have been bringing students and scholars together to work on AI, visualization, computer music, video games and similar topics for over a decade. There’s a rich groundwork at Duke for interdisciplinary studies between these fields.”

Garrick is still undecided about her major, but says she’s considering the IDM in Computational Media.

“Since I’ve been at Duke, my thinking about my education and my future has changed,” she says. “Classes and grades are really important, but I’m also focusing more on skills that are transferable. It’s not just about making an A in a class, but about what skills I’m taking away. I’m interested in working in video game and movie design after graduation, so building a competitive portfolio while I’m at Duke is really important.”

“There are a lot of career options for students who major in Computational Media,” says Szabo. “Even before the IDM was officially created, we’ve had Duke graduates working in marketing and design at companies like Google, Apple and Microsoft. There are opportunities in museum studies, digital journalism, creating digital exhibits, and our students are well-positioned for many graduate programs.”

“It’s been quite an adventure understanding the resources for combining my love of art and tech at Duke,” Garrick says. “There are a lot of pathways and experiences to explore, and I’m still considering my options, but I’m enjoying the process. Learning to balance my interests is a joy in itself.”