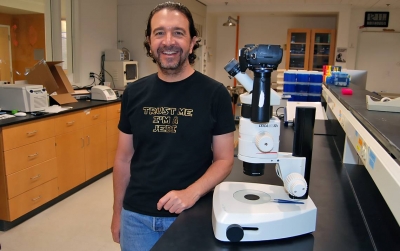 Drosophila, the fruit fly, has been a staple of undergraduate education in Biology for a long time. More and more, however, undergraduates are becoming assets in Drosophila research. One example: Duke Biology’s Eric Spana and a group of six undergrads have uncovered the genetic basis of a mutation known for over 100 years: Drosophila’s speck phenotype.

In 1910, Thomas Hunt Morgan identified speck flies, characterized by their slightly darker body and by a little dark spot at the hinge of their wings. Though speck has been a useful tool for genetic research since the early 20th century, scientists still didn’t know which gene was responsible for this peculiar color pattern. Now, thanks to Spana and his students, this 100-year-old secret was revealed: speck is codified by the AANAT1 gene. The paper describing their efforts and results was published in G3: Genes, Genome, Genetics in September 2020.

Spana had the idea for the classroom project while attending a scientific conference. He decided that understanding the genetic basis of a Drosophila phenotype was the perfect project for his Bio 414LS class, Experiments on Development and Molecular Genetics.

“The project is really a take-off on the standard microbiology ‘unknown’ project where students do experiments to identify a bacterial species they isolated. But in this case, the historical aspect gives it more of a ‘solving a mystery’ flavor and doing these experiments isn’t just for their education and understanding, but to further everyone’s understanding of cell and developmental biology,” says Spana.

“It was my first experience doing independent research,” says Katie Ellis, who is currently pursuing an MD-PhD at Yale studying skin disorders. Ellis took Spana’s class in 2015, then completed two semesters of independent research in his lab. Initially interested in animal conservation, Ellis fell in love with genetics and molecular biology while spending a semester abroad studying in Copenhagen.

“I saw Spana’s class as a way to gain more experience with genetics and with research,” Ellis said. She continues to apply the techniques she learned with Spana in her current work. “I learned CRISPR with Spana when it was still a big novelty, and now I use it all the time in my work.”

Amanda Abrams, now a periodontics resident at NYU College of Dentistry, agrees with the lasting impact of those lessons. “Working under a microscope to carefully dissect fruit flies contributed to my skills as a dental professional. I learned that I couldn't drink coffee before doing speck research, much like I can't before working on a patient.” Abrams said.

Ellis, Abrams and the other students who helped Spana in his discovery had no prior knowledge of Drosophila genetics. Through their class project and following independent research, these students learned how science works from the ground up – developing their expertise in science history, literature search, genetics, molecular biology, microscopy, scientific reasoning and writing.

Working alongside Spana also made some of these students fall in love with the process of research.

“This project helped me cement an interest in research and reinforced the power of investigation that can happen in a classroom, especially with a group of interested and motivated undergrads,” says Dr. Brandon Ruderman. Now an emergency physician conducting clinical research on ultrasounds at Duke, Ruderman said that Spana’s course and the speck project “reinforced that I wanted to have research involved in my career going forward as a physician.”

What students learned even applies beyond the lab. Daniel Zhu, another student who worked on this project as an independent study, majored in biology and mathematics, but went on to work as a business consultant and pursue an MBA.

“The process of work planning, how to sequence all of this work, is something which has been very applicable to my career. A lot of the research skillset, building a procedure and figuring out how to design an experiment to answer a question are things that are very applicable to other fields,” says Zhu. “It was a big exercise in working independently towards a bigger project.”

By working on real world problems, students learn a hands-on approach to science. At the same time, they contribute to the advancement of scientific fields and acquire skills that span far more than biology.

“Genetics research is an ever growing field, whose foundation lies in the discoveries made on model species such as Drosophila. With the help of a brilliant and passionate mentor such as Spana, it is possible to constructively add to that foundation, even if your experience is limited,” Abrams said.

For Spana, this success story highlights the immense discovery potential that lies within undergraduate classrooms.

“Students are great at solving problems,” he said. “Give them problems worth solving!”