How Do You Teach Art & Collaborate Remotely?

Duke faculty teaching visual arts, music, and theater share how they navigated the move to online teaching. It wasn’t easy. Supplies were mailed, collaborative projects were reinvented. Transformations and solutions discovered this spring have expanded the teaching repertoire—even as we look forward to safely returning to studio and stage.

To really see a painting, print, or drawing is to notice its details—the quality of a particular brushstroke, the subtle distinctions in hue, the severity of linework. When campus closed in March and the visual arts faculty in the Art, Art History & Visual Studies Department were suddenly hundreds, if not thousands, of miles away from their students, those details became harder to grasp, much less teach.

“It was a nightmare,” said Beverly McIver, a painter and professor of the practice who was teaching “Intermediate Painting.” Normally McIver emphasizes the use of color in her classes, but bad lighting from webcams and different computer screens made it difficult to give that feedback to students’ works in progress. “I can’t imagine teaching something so tactile online,” she said. Instead, she focused on advice like how to think about a face as separate shapes in order to paint a compelling portrait.

Before she could even get to that hurdle, though, McIver had to clear another one: getting students the supplies they needed to paint in the first place, which most had left on campus when they left for spring break, along with their half-finished projects. On top of that, McIver was teaching oil paints, which are flammable enough that the USPS won’t accept them. And she had encouraged students to work in large formats. “Who knew?” she said.

Bill Fick, a lecturing fellow and printmaker who was teaching “Intermediate Drawing” and “Printmaking,” had a similar dilemma. “I wanted to figure out a way for people to continue making things by hand,” he said. In the circumstances, that commitment meant not only packing printmaking supplies into boxes and getting them in the mail to students, but also navigating the bureaucratic minutiae of the shipping options so students wouldn’t be stuck with a bill when they mailed their final projects back to him.

But art classes are often about the studio community as much as the final products. “I think the students enjoyed the interaction,” he said. “This class was very conversational.” The difficulty for Fick and others was finding ways to maintain that camaraderie while everyone was separated.

That difficulty is true even in digital arts (which had its own logistical hurdles, thanks to less-than-dependable wireless networks and RAM-sucking programs). “I normally go computer to computer to see how students are doing,” Raquel Salvatella De Prada, a computer artist and assistant professor of the practice, said about her “Digital Imaging” and “3D Modeling and Animation” classes. Instead, she used Zoom breakout rooms to allow for group work and started Slack channels to allow for open discussion.

While the experience wasn’t simple, some professors said they would carry new tools—like collaboration platforms and video tutorials—back into the classroom with them. But more than anything, they want to return to their studio communities and the ease of mentoring students as they create work, in person. “I do not want to be Bob Ross, no offense to Bob,” McIver said.

Before the Nasher Museum closed to visitors and staff in mid March, Julia McHugh, Ph.D., Trent A. Carmichael Curator of Academic Initiatives, had the presence of mind to grab something from her desk: a 3D model of an ancient Peruvian ceramic work. The model (produced by students in the Wired Digital Art History Lab) was perfect for her online lectures on Andean ceramics and safe art handling. McHugh shared: “We didn’t anticipate using the model in this way, but it has proved very useful!”

Carla Copeland-Burns teaches flute for the Music Department, and in a normal spring, also performs in symphonies throughout the region.  To move her spring course, “Duke Flute Studio,” online, she embraced a variety of tools. “Some of my students moved to repertoire more suited to playing alone or with digital resources,” she shared. “They explored playing with electro-acoustic music or used the app Acapella to create a ‘quartet’ in which they perform all the parts.”

Still, the transition was not easy. “Some students had left their good instruments on campus and were stuck using the beginner-level flutes they had at home.” Copeland-Burns worked with recordings for students dealing with poor internet connection—which had its unexpected positives. “Students who were always reluctant to use recordings as a way of self-assessment, or by practicing with an accompaniment, have by and large adjusted terrifically and are more closely observing the concepts we’ve covered. In other words, they’re hearing themselves differently!”

Some students also experienced a changed relationship to their playing. “One of my students said they play because it calms them and keeps them focused in everything else they do.”

“It is far from ideal playing to a prerecorded accompaniment, and without hardware to help, but there is value in how it has encouraged more detailed understanding of the collaborative part,” says Copeland-Burns. “After being forced to teach music this way, I see certain positives in the online environment, and I am planning on incorporating some of this in the future even when meeting in person.”

Instead of an end-of-semester recital, Duke Flute Studio students will have a watch party. Copeland-Burns is working on producing a video of her student’s individual performances. “There’s a sense of teamwork in any artform,” says Copeland-Burns, “It seems this can also happen, to an extent, online.”

Learning to Collaborate Across Distance

Understanding that her students had to work across time zones, with different circumstances at home, Talya Klein, instructor of Theater Studies, was not immediately sure continuing to collaborate was the right decision for her “Acting for the Camera” course.

“I was faced with this question for our final project: should I ask my students to collaborate or to go solo?,” said Klein. “I ultimately took a chance and opted for collaboration for a project that involved the entire class. Borrowing the interlocking structure of Arthur Schnitzler’s play La Ronde, my class wrote and shot a fifty-minute original film.” Twelve students worked in pairs to write and shoot their own three-minute scenes—and every student rose to the occasion.

“It reminded me that when everyone feels vital in a collaboration, no one is left behind, and that teamwork, imagination, and resourcefulness are possible, even when our community is not sharing the same physical space.” There was even a premiere over Zoom—”cocktail attire optional, please BYO movie snacks.” 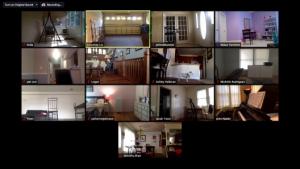 For another story remote arts education, read about dance instructor Courtney Liu's efforts to teach her ballet class over Zoom.