Amanda Hargrove Has a Target on Hard-to-Fight Diseases 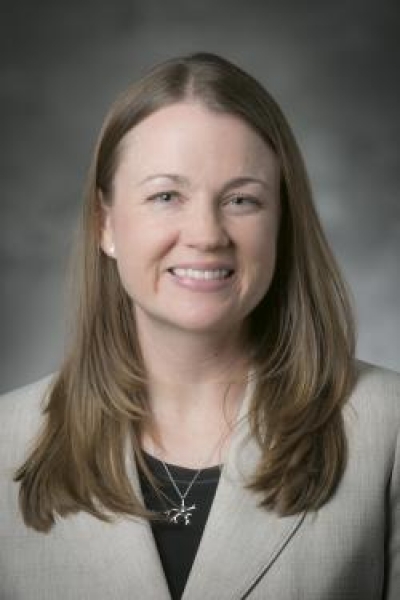 An assistant professor in chemistry has been recognized by the Alfred P. Sloan Foundation for her “potential to revolutionize” the field.

Amanda Hargrove has been named a 2020 Alfred P. Sloan Research Fellow in Chemistry in honor of her success as a chemist. The fellowship acknowledges Hargrove’s work on the small-molecule targeting of RNA, which may hold the key to curing a number of hard-to-fight diseases.

“Many of the drugs in our pharmacies today are molecules that work by binding to proteins,” said Katherine Franz, chair of the Department of Chemistry. “Amanda's ambitious and innovative research program asks the deceptively simple question: What if we had small molecules that could target large molecules of RNA that do not code for proteins? What do those chemicals even look like? It has been amazing to watch her build a research team that is answering these questions and driving this field forward. Even more impressive is the way she drives innovation: her approaches to student mentoring and fostering collegial, inclusive research and learning environments are exemplary and obviously effective!”

Growing up, Hargrove loved learning and wanted a career that would benefit society, and like many young people thought this meant becoming a doctor. “I’ve always believed it is every person’s individual responsibility to use her or his gifts to make the world a better place,” she said. However, her career path took a turn the summer after her freshman year at Trinity University when she was presented with the opportunity to do chemistry research, the obvious choice over another summer working as a bookkeeper at a construction company.

“It was that summer of research after my freshman year when I realized that scientific research was about working as a team to solve really exciting and difficult problems that were going to have an impact on the world,” Hargrove said.

Having decided on a career in chemistry, Hargrove’s first inclination was to pursue a position at a primarily undergraduate institution with a focus on teaching. She admits that this initial decision was partially based on her own self-doubt and that, after graduate school at the University of Texas at Austin and postdoctoral work at Caltech, she realized that combining her love of teaching with graduate-level research was her real passion.

At that time, the ENCODE Project was producing a new body of research about the function of non-coding DNA and RNA—the 98.5 percent of the of the human genome that doesn’t produce proteins. Formerly considered “junk,” scientists had begun to realize it played an important role in disease. Hargrove had done research on molecular recognition and how small molecules interact with large biomolecules during her PhD and postdoc, so she made targeting non-coding RNA the focus of her new research-intensive career.

“In a number of metastatic cancers, for example, the single best predictors of metastasis are actually the non-coding RNAs,” Hargrove explained. “And so we need new tools to determine the structure and mechanism of action of these molecules—with the ultimate goal of developing small-molecule drugs that can modulate their function.”

Even today, Hargrove said, there are no FDA-approved, small-molecule drugs that can target RNA in this way. “The potential is staggering,” Hargrove said. “The entire genome might become targetable if the field is successful.”

Hargrove’s work approaches the fundamental questions of that problem, finding the specific properties of small molecules that could allow them to target RNA in a selective, functional way. Doing so would open the door for new treatments for some cancers, multi-drug-resistant bacteria, HIV, and picornaviruses. So far, her laboratory has discovered specific properties shared by RNA-targeting small molecules that may help narrow the search for those drugs, and they have made progress on understanding which RNA structures may be targeted.

Hargrove doesn’t yet have specific plans for the Sloan Fellowship, which offers a $75,000 award. But she notes that the funding isn’t tied to specific deliverables, like most government funding.  “You have the freedom to test novel ideas that may be far outside of the scope of existing funding,” she said, “and that can open entirely new research directions.”