Building Sandcastles with History: Recreating the Vision of Pre-Modern Mapmakers 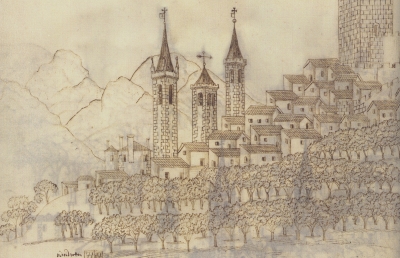 It’s no surprise that pre-modern maps look a lot different than modern ones. Cartographers and surveyors of the past didn’t draw perfectly to scale. Their works included inconsistent heights, strange topographies, and even non-linear perspectives.

Often, those oddities are considered mistakes—errors resulting from inadequate technology than we can correct with new tools like GIS mapping software. But two Duke scholars are taking the opposite approach, asking what could we learn about the medieval and early modern world if instead we used technology to try to understand the maps as they were drawn.

With their project, “The Sandcastle Workflow: A Malleable System for Visualizing Pre-modern Maps and Views,” Instructor of Art, Art History & Visual Studies Edward Triplett and Gilhuly Family Associate Professor of History Philip Stern are undertaking an experiment that they hope will spur novel questions in their fields. And they have been awarded a $99,339 grant from the National Endowment for the Humanities to fund that work.

Triplett and Stern want to create a method that allows us to understand how people experienced and represented space in previous eras. “It’s about the argument inside the map,” Triplett said. Possible research questions include whether certain buildings, such as churches, are shown in proportion to others, as well the relationship between the land and the sea. If Triplett and Stern find that the proportions are off—according to our modern sensibilities—they won’t “correct” them. Instead, they want to offer a way to explore what the world is like to somehow who sees it that way, learning something new about ancient viewpoints in the process.

As a case study, the Sandcastle Workflow will begin with the 1509 book Livro das Fortalezas, which features drawings and plans for 55 fortresses along the Portuguese border and which Triplett has been working on since 2017 in his Book of Fortresses project. He explained that the plans show us what power structures existed at the time. Speaking from the point of view of the book’s creator, Duarte de Armas, Triplett said, “This is what we want to be telling our audience about what our kingdom represents. These are all the images you need to comprehend one of the borders of our country.”

“The fundamental problem for people who work in the pre-modern era is that so much of the digital humanities, especially digital mapping, try to force your work into a modern epistemology,” Stern said. Digital tools leave little room for the oddities of pre-modern maps, and the standard process is to “georectify” them, matching the primary sources to contemporary ones in order to create a more consistent view. While that process has generated many useful insights, it also “does a certain kind of violence” to the primary sources, Triplett said.

Interpreting those arguments gets complicated with disorienting maps that eschew Cartesian methods or combine multiple perspectives into a single view, however, so Triplett and Stern emphasize that the Sandcastle Workflow is an experiment to see what’s possible. Their plan is to first turn pre-modern maps into data by building a database of the different icons used in Livro das Fortalezas, as well as various maps and views of London and Lisbon. They hope to later include British and Portuguese colonies, too. Not only can that database be analyzed to find trends across different maps and eras, but they hope it will also allow them to use video game tools like the Unity game engine to build 3D models without erasing the ambiguities that make the maps so interesting.

“We hope it’s completely wacky and out of scale,” Stern said.

They also plan to create tools other humanists and students can use to view the maps, including an online portal that links together their 3D models, the original map, and a georectified version. Long-term, they hope that the Sandcastle Workflow could be the basis for virtual reality experiences or even allow new uses of AI in their fields.

But this project is very much a first preliminary step that Triplett and Stern hope others can learn from and replicate. The name isn’t just a tongue-in-cheek reference to the castles they will study, Triplett said, but also an allusion to how they hope others can build with it. “It’s working on that metaphor of the sandbox, the space where you do your experimentation. But it’s also just like molds you use to build a sandcastle. We’re trying to create some templates so people can hit the ground running.”

The NEH grant will provide funding development costs, software, student workers, and travel. Triplett and Stern are also leading a related Data+ project for the summer of 2020 and a Bass Connections project team the following academic year.