Cinematic Arts: A New Concentration and Minor Bring Film at Duke into Focus 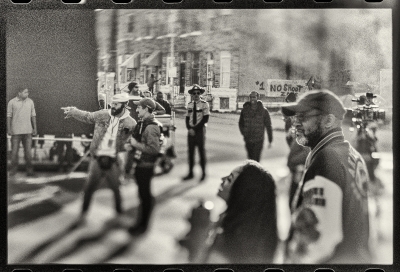 When Clarence Hammond enrolled at Duke in the fall of 2005, he thought he wanted to be a lawyer. He was an overachiever, too, so in his first semester he took six classes, almost all of which were in political science.

By winter break, he knew something wasn’t right. “I felt like the deeper I got down this pre-law/political science path, I wasn’t quite in love with it the way I hoped,” he said. “The courses were great, but it wasn’t really sparking that passion that I had as a kid.”

Since he got ahead in that first semester, Hammond had some flexibility in his schedule. He started experimenting. He thought back to all the stories he loved growing up—the movies and TV shows—and figured he would give it a shot. He stuck with the political science major, but added an English minor and what was then called the Film/Video/Digital certificate, later renamed Arts of the Moving Image (AMI). “I could build my own mini-film school–type minor,” he explained.

He took classes on adapting Shakespeare, play and novel writing, screenwriting, experimental film, and narrative film. He took part in a marathon moviemaking competition, in which his short script won, and other Duke student filmmakers had 24 hours to film it. Then, in the spring of 2008, he participated in the Duke in LA program, spending a summer in California interning for Overbrook Entertainment, the production company and record label Will Smith founded in 1998.

A year later, Hammond was hired at Overbrook. Today, he serves as the vice president of production, finding new projects and shepherding them into being. One of them, Charm City Kings, debuted at Sundance in January and will be released in theaters on April 10.

Duke has been quietly producing filmmakers like Hammond for decades. Now, Duke film will take another big step, offering a major concentration and minor in Cinematic Arts for the first time.

In fall 2020, AMI will change its name to Cinematic Arts and merge its classes with complementary offerings in the Art, Art History & Visual Studies department. Students will be able to declare a major in Visual & Media Studies with a concentration in Cinematic Arts, or pursue a minor in Cinematic Arts.

The changes, especially the new concentration, are designed to deepen the film education available at Duke, said AMI’s director, Josh Gibson. With a certificate program, most film classes have to be introductory, since any one could be a student’s first. But the concentration will allow higher-level courses.

“I think students will be able to develop a pathway in film that will have much deeper implications for potential career paths,” Gibson explained.

Doing so is the next step on an investment that began in in 1986, when Duke first offered film classes. The university then launched the Film and Video certificate program under the auspices of the English department, where founding director Jane Gaines, now a professor emerita of Literature, held her appointment. The digital component of the program was added in the early 2000s.

Film-related scholarship has been taking place throughout the university. In addition to AMI and visual media studies, English and the Program in Literature still offer classes on film, as do the departments of Asian & Middle Eastern Studies, Romance Studies, and others, as well the Center for Documentary Studies, which also runs the Full Frame Documentary Film Festival. There are also substantial co-curricular programs that support exploration in the film industry, like Duke in LA, Duke in NY, and the Duke Entertainment, Media & Arts Network (DEMAN).

Film as a liberal art

The diffuse nature of film scholarship at Duke is a result of the university’s unique approach to the subject.

“All of Duke’s art programs, including the cinematic arts, are situated inside the humanities,” said Shambhavi Kaul, filmmaker associate professor of the practice in the department of Art, Art History & Visual Studies. “This makes it very different from a typical film school, because there is the potential for rich, cross-disciplinary work.”

In particular, Duke’s wide-ranging expertise in cultures around the world adds a perspective often lacking in film schools. “I think we’re uniquely positioned to look at film globally, as opposed to just thinking about the American film industries,” Gibson said.

The location of the university—away from the industry centers in New York and Los Angeles—adds to the potential, Kaul said. “We also have something unique here at Duke in that our program is situated in the (American) South. If you look at depictions of this landscape in popular cinema you quickly realize there is untapped potential to elaborate on it by engaging locally.”

But while it offers something of an outsider perspective, Gibson pointed out that the co-curricular programs and alumni networks ensure students still have connections to Hollywood, if they want to follow that path. “We do have these great opportunities to help students who are interested in getting into the industries and professions,” he said.

Gibson also hopes that the new Cinematic Arts offerings will make it easier to navigate all of those opportunities, as well as the non-academic programs currently associated with AMI, including the Screen/Society film series, film equipment rentals, and film-specific endowments. “It will become a central hub for all of the other [film] things that take place on campus,” said Gibson. “It can be a resource so that all these things don’t seem so disparate.”

“There are all these separate [film] societies that are very strong on their own,” said Quinten Sansoti, a senior in the AMI certificate program, adding that the new Cinematic Arts offerings will generate common goals among all the programs.

Sansoti is a political science major who took a screenwriting class his sophomore year and fell in love. He started writing scripts on his own time and interned at a production company in Los Angeles before deciding to write another film for an honors distinction project.

“[The AMI faculty] just care so much about the students,” he said, noting that he meets with instructor Cole Russing every week to review new changes to his screenplay about a baseball player-turned-cop, a murder, and a plot to fix minor league baseball games. “Being able to work with them in a setting where there are only 8 to 12 or 15 kids in a class, you just get so much more out of the material.”

Josh Yip, another senior working on an honors distinction project—a short horror-comedy film about feral cats called Darkness Purrs—echoed the sentiment. “All my professors are super helpful. They’re great to work with and bounce ideas off of,” he said.

Sansoti and Yip also praised the impact of recent investment in arts initiatives by the university like the Rubenstein Arts Center. It provided a new home for student activities like the Duke Independent Film Festival, which Sansoti is leading this year, and Freewater Productions—both of which feature student-made films.

Duke’s extensive alumni network is playing a role, as well. DEMAN and programs like StudioDuke are creating deep connections between Duke alumni and current students who work in the industry. Sansoti, for instance, used StudioDuke to start working with Kevin Plunkett, a Duke alumnus from 1995 who is now executive vice president and head of television at New Regency TV.

The Duke alumnus was always interested in film, but opted to attend Duke for his undergraduate studies instead of film school because he thought a liberal-arts education was a better foundation for a long-term career as a filmmaker.

“There was an open-mindedness of: How can you blend it and make it your own? I felt like there was a validity there, and I didn’t see that at other schools,” said Williams, who completed a Master of Fine Arts at the University of Southern California after graduating from Duke.

Williams is now a working filmmaker who produced Miss Juneteenth, which debuted at Sundance this year. While grateful for the technical expertise he gained from his graduate education, Williams said the flexibility at Duke was essential to his approach.

“I really think fondly about those four years I was here, of having access to equipment to try things and experiment with no rigid schedule or plan of what a movie should and shouldn’t be,” Williams said.

More and more Duke alumni are entering the film industry with similar training, and they’re making an impact. Williams and his fellow alumnus, Hammond, both spoke to the growing prominence of Duke alumni in the industry.

“Duke has been known as the place you go to be a lawyer, a doctor, an engineer, or a businessman,” Hammond said. “For while, the film side of Duke was quieter. But now with so many Duke alums doing really good work at all different levels—studio through independent, executive through producers, to actors and actresses—I feel like Duke is starting to get as a strong a reputation in the filmmaking community as it has in every other industry.”

With the new Cinematic Arts concentration and minor, film at Duke is poised to continue growing.

The first photo shows the set of Charm City Kings. Clarence Hammond is in the center in the black jacket. (Photo by William Gray.)