This Difficult Method of Building Vaults Has Lasted for Millennia. But Why? 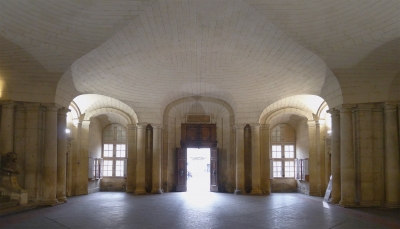 The vault in the Arles town hall is one of the examples that inspired Sara Galletti's research on stereotomy. (© Mbzt / Wikimedia Commons / CC-BY-SA-3.0 / GFDL)

When Sara Galletti first walked into the town hall in Arles, France, she was stunned.

“It’s a relatively large room, and it’s covered by an absurdly shaped vault,” the associate professor of Art, Art History & Visual Studies said. “It’s several types of vaults interpenetrating each other, and it holds up this heavy stone ceiling with no pillar at the center.” The mix of sober, bare stone and intricate, delicate lines fascinated her.

It’s a style of vaulting called stereotomy, and Galletti’s fascination only grew as she studied more examples. Not only do they show up across time and space—from Greece in the third century BCE to medieval Cairo and more—but the geometrical math defining their shapes wasn’t actually invented until the end of the 18th century. That’s a century after the Arles vault was constructed and nearly 2,000 years after the earliest examples.

Galletti’s interest bloomed into a new book-length project tentatively titled History of Stone Vaulting in the Pre-Modern Mediterranean: Practices, Theories, and Patterns of Knowledge Transfer, which was recently awarded a $60,000 National Endowment for the Humanities grant. And her research has continued to unearth fascinating tales—like convincing one of the handful of remaining stereotomy masters to break his guild’s oath to tell Galletti how these vaults are made.

The basics of the process are clear, because they are also what make stereotomy so notable. Unlike most kinds of stone-vaulting, which use small pieces of material to create the end result, stereotomy features larges blocks of stone. “Imagine one of those 3-D puzzles,” Galletti explained. “Mounting and designing those elements is a very similar process. If you’re building in stone with large elements, it means each one is custom cut to take up a specific place in the vault.”

That process takes immense amounts of labor—both mental to map out each stone and physical to cut them to shape. But it has no functional benefits.

A single mistake requires recreating the entire stone from scratch, so stereotomy is much more difficult than other techniques. The masons must be experts in their craft, so stereotomy is much more expensive that more common brick vaults. It also doesn’t make the vaults stronger or last longer, nor does it save materials. “Stereotomic vaults have no reason to be other than sheer virtuosity,” Galletti said.

That virtuosity also makes them hard to study. Many architectural historians have written about stereotomy, but few have been able to offer insight into the actual practice of building them because the methods have been closely guarded secrets among masonry guilds. “I think there’s like four or five of these masters left,” Galletti said. “They tour Europe and restore early modern works by being able to apply the same techniques.”

Incredibly, Galletti found one and convinced him to explain how he does it, even though his guild requires an oath of secrecy. She spent three days on worksites with him, receiving a crash course in his techniques. “The first thing he told me is, ‘I am talking to you because you are honestly interested in learning these things,’” Galletti said. “’If I keep my oath, that’s the end of my practice. If historians start talking about this and actually understand the practice, that may help.’”

Galletti’s research has already uncovered signs of hope, though, because what fascinates her most about stereotomy is how widespread it is. Not only does the practice span millennia and continents, but various peoples seem to have recreated it on their own throughout history. “It’s not a linear development of ideas,” Galletti said. “They pop up in different forms in different cultures at different times.”

In some cases, the historical record explains the transmission. For instance, researchers have tracked some stonemasons migrating from one region to another, bringing stereotomy with them. But just as often the development seems spontaneous.

Ultimately, that’s what Galletti loves most about stereotomy: it’s a way to explore the shared human predilection for testing our abilities, simply because we can. “I find it endearing that that humans want to play with difficult things, with no reason whatsoever except that in the end, you’ve done it,” Galletti said. “I think this kind of serious playfulness lets you and I identify with someone in the third century BCE who did that. It connects us.”

Standing beneath one of these virtuosic vaults, Galletti said she can’t help but think of that shared human joy. “I’m not going to say that what distinguishes humans from non-human animals is stereotomy—but sometimes I’m tempted,” she said.