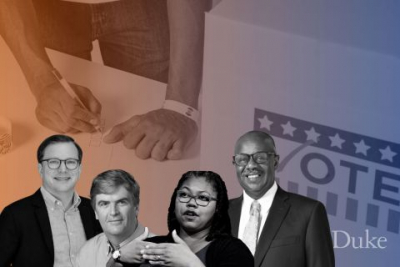 It may take weeks before the country knows which party will control the U.S. Senate, but the 2022 midterms elections already provided Duke political science, policy science and history scholars with a lot to think about.

The faculty spoke at a special briefing open to media and the public at the Sanford School of Public Policy Wednesday, covering topics from Republican party leadership to the role abortion and other hot-button issues played in the election results.

ON THE LACK OF A TRUE “RED WAVE”

“There have been few, if any surprises breaking in the direction of Republicans, whereas there have been many surprises breaking in the direction of Democrats. This outcome flies in the face of two rather fundamental laws of American politics – first that voters tend to punish the party in power in the midterm elections and second that when economic concerns predominate voters’ minds, that’s bad for incumbents. “

“The results of the election show this was not a typical midterm election. The results last night didn’t bear out what the historic patterns would suggest. One of the reasons is the issue of abortion seems to have mattered in terms of who turned out and for whom they voted once they turned out. Another issue that showed up in this election is one of democracy being at risk. There appears to be some evidence that voters made their choices with some of those issues in mind. Those issues made this election somewhat different.”

“One of the things that has been interesting to me, in looking back at the rhetoric of the last four years, is the revivification of the kind of rhetoric and tactics in the 20-teens that had been used in the 1890s to justify disfranchisement. The language of election fraud, stolen democracies, of needing to defend the integrity of the ballot with violence, if necessary, is the language of white paramilitary groups in a changing South fighting back against an expansion of multiracial democracy in the 19th Century, taking on a new life in the 21st [century]. Things are never exact duplicates of the past, but there is a borrowing of that language, a learning of that strategy to do similar work.”

“We are reminded that democracy isn’t just something that happens. There is this sense that it’s just innate, that of course we are always going to have democracy because look at us, we are awesome, as opposed to our democracy is very, very new. We have only had democracy for everyone starting in 1965 with the Voting Rights Act. The question is whether people will be able to maintain the energy to protect it and the reasonable knowledge to figure out strategies for protecting it.”

ON THE ROLE THE DOBBS DECISION HAD IN THIS ELECTION

“The Dobbs decision was another moment where people had to stop and think about how much they embraced narratives of progress in terms of rights and people’s control over their personhood. I think Dobbs scared a lot of voters who had stopped thinking their votes mattered.”

“Voters were responding to extremism. Abortion rights is one thing, but it was the extreme position that Republicans have taken on abortion since Dobbs and some state legislatures have extreme models they have enacted. I think that will carry over to 2024.”

NORTH CAROLINA IN THE NEXT TWO YEARS

“There are going to be a lot of Democratic legislators getting lavish attention from Republicans to overturn Gov. Cooper on the veto. It was another disappointing night for North Carolina Democrats. Democrats did hold on in the legislature in the House in the sense that Republicans are one short of a super-majority, that’s perilous for Democrats – just one vote.”

“The judicial gains are everything the Republicans wanted. The judiciary is now a Republican institution clearly in North Carolina. In terms of the legislature, the Republicans fell short, the problem for the is that the Democrats are on the defensive in the legislature. There was no real talk of expanding and getting its own majority. Democrats are reduced to trying to stop a super majority from happening again. It’s a good night for Republicans, they got most of what they wanted. They will be looking for that one vote in the state House and they might find it.”

WHAT THE MID-TERMS MEAN FOR DONALD TRUMP

“There’s no question this was a bad election for Donald Trump. With the possible exception of Kari Lake in the governor’s race in Arizona, and possibly Herschel Walker in the senate race in Georgia, every governor and senate candidate he (Trump) endorsed in the main presidential battleground states lost or it appears they lost. There were other cases where he (Trump) endorsed candidates in the primary where those candidates tanked. On the other hand, it appears he (Trump) was a motivating factor among Democratic voters and his presence looming over the election prevented at least some independent and even some Republican voters who voted democratic in 2018 and 2020 from coming back into the Republican fold.”

ON RON DESANTIS WIN IN FLORIDA

“Florida has been shifting red over the last few election cycles and DeSantis was riding that wave, he did not cause that wave. On the other hand, if the state of play nationally within the Republican party is in part a question of whether there are viable alternatives to Donald Trump who could appeal to some of the voters who supported Trump, while also coalescing other parts of the Republican coalition, there is no question that DeSantis is the first among equals in terms of alternatives to Donald Trump and this result last night only strengthened his case.”

Asher Hildebrand
Asher Hildebrand is an associate professor of the practice at the Sanford School of Public Policy. Hildebrand served for nearly 15 years in congressional offices and on campaigns. He was formerly chief of staff to U.S. Representative David Price (D-NC).

Pope “Mac” McCorkle
Mac McCorkle is a professor of the practice at the Sanford School of Public Policy at Duke. McCorkle was an issues consultant to political candidates, state governments and others for more than 25 years.

Today (Thursday), two further faculty sessions will be held, one specifically for Duke Health and the other for the campus community.