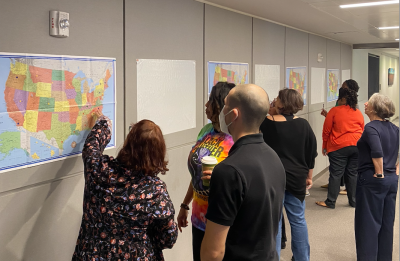 Workshop participants completed a mapping activity to interrogate their assumptions about language.

On election day, a group of 30 Durham Public School teachers gathered in a ground floor conference room in the Brodhead Center to participate in a Duke faculty-led workshop about language justice in educational settings.

The event, which qualified as a professional development continuing education credit for the teachers, had three goals: exploring ideas about language attitudes, examining the origins and effects of monolingualism, and discussing how to reconcile teaching obligations while advocating for just classroom environments.

One of the day’s first activities was for the cohort of educators — primarily language teachers of Spanish, English and ELL (English Language Learners) — to introduce themselves, their subject area and their DPS home school, before breaking into small groups to complete a mapping activity.

Participants were asked to place sticker dots on a United States map indicating their ideas about “What area(s) is it believed people speak the most correct/least correct English?”

“It’s up to you,” replied workshop facilitator, Luciana Fellin, professor of the practice of Romance Studies and the lead faculty on the research project fueling the workshop: Community Partnerships and Pedagogies of Racial Justice: Identifying, Understanding and Challenging Raciolinguistic Practices in the Duke and Durham Communities.

Fellin and the other workshop leaders — Dominika Baran, Liliana Paredes, David Malone and Hae-Young Kim — were awarded a Racial Inequality Research Grant, a funding initiative from the Office of the Provost and Duke Faculty Advancement to engage topics related to “Race, Racism and the History of the American South.”

Working in groups of three, workshop participants began to discuss their notions of “correct language,” prompted to share what they grew up hearing about different ways of speaking.

They were also asked to consider what other languages are spoken in the United States and to try and locate those languages geographically on the map.

What emerged was a discussion about how language brings with it many associations and how attitudes about language influence our interactions with people, specifically students.

“Sometimes my students at Duke tell me I have an accent,” said workshop facilitator David Malone, professor of the practice of Education.

“Do y’all think I have an accent?” he asked the room.

Fellin quickly interjected, “But wait, who here has an accent?” she asked the group. Everyone raised their hand. “Exactly!,” Fellin said.

“But when students tell me, ‘You sound so Southern,’” Malone said, “Well, there’s a lot more to that statement – it’s like they’re saying: I came to Duke and got this guy?”

As the group began to settle into the work, stickier conversations about dialect, region, socioeconomic status and race followed. A central focus remained: How do associations about language affect classroom environments?

“We have to be intentional about the work we do, especially because our population is changing,” said Louis Harrison, an assistant principal at Hillside High School who attended the workshop. “As educators, we wear a lot of hats in the classroom, and professional trainings like this one can help us gain strategies to better serve our English-learner students and their families.”