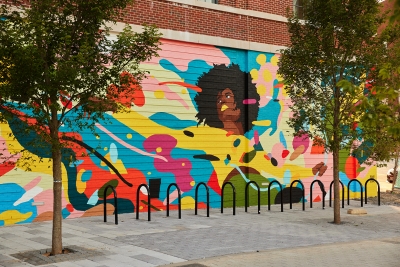 Ayana Arce studies quarks, which involves colliding atoms at high speeds and watching those constituent particles come into focus. But a recent collaboration between the associate professor of Physics and a visual artist is making vital human bonds visible instead.

Arce’s research is the inspiration behind “We Contain Multitudes,” a new mural in northeast Washington, D.C., depicting quarks artistically as creative, resilient and interconnected women.

It’s the second piece in a public art series by Amanda Phingbodhipakkiya called FINDINGS, which celebrates women and science and reimagines science through vibrant large-scale murals. Supported by the Heising-Simons Foundation, the artist is working with renowned scientists from across the country to explore topics including dark matter, climate change, condensed matter physics and exoplanet science.

When a friend and mentor involved with Heising-Simons reached out to Arce about participating in the project, she was intrigued.

“I didn’t really know what to expect, because my research focuses on interactions of elementary particles that I consider difficult to visually represent,” she explained. “But conversing with Amanda was the easiest thing imaginable. She is incredibly smart, curious, and encouraging.”

The physicist’s engagement included helping to create the massive work. She traveled to D.C. in May to paint alongside Phingbodhipakkiya, accompanied by young people from a nearby school.

“I was really struck by how perfectly crafted the experience was as an outreach event for both science and art,” Arce said. “The activity brought together scientists, local artists, teachers and students in a really unique space for conversation and thoughtfulness.”

She added that it was “surprisingly meditative” to work on the mural, “with everyone quietly filling in brushstrokes in their tiny corner of the emerging piece.”

“It was a striking contrast with the vibrant energy of the work itself, but it also reminded me of my most thrilling moments of scientific collaboration, when the big picture starts to emerge from many small, carefully crafted contributions.”

Arce is looking forward to returning to those scientific collaborations following planned but pandemic-extended closures to the facilities where she works on understanding and exploiting jets – clouds of particles produced by flying quarks. Knowledge about these interactions enables scientists to learn about physical phenomena we don’t understand yet, like dark matter.

“The Large Hadron Collider has been shut down for over two years, and during that time we have been figuring out new ways to filter the enormous rate of proton collisions by identifying the jets that are most likely to tell us something new,” Arce said. “Next year we will finally put those new ideas to the test.”

Read more about the mural from the artist’s perspective in a recent Q&A from Science or on her Instagram.