Duke Team Awarded $1 million to Predict the Next Pandemic 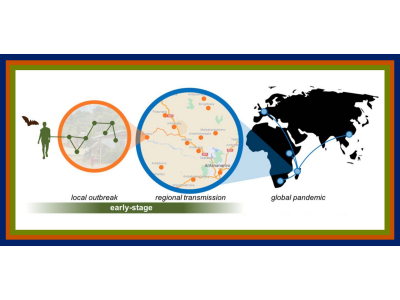 The interdisciplinary team of researchers aims to understand what factors turn a local outbreak into a global pandemic by focusing on human connections at a local, regional and global scales. (Nunn et al.)

Experts know COVID-19 won’t be the last major pandemic. What they don’t know is where, or when, the next one will begin.

Thanks to a $1 million grant from the National Science Foundation, the team is pinpointing the factors that are likely to turn a local outbreak into a global pandemic.

At Duke, the research is spearheaded by Charles Nunn, Gosnell Family Professor in Global Health and Evolutionary Anthropology and director of TriCEM; James Moody, professor of Sociology and faculty director of the Duke Network Analysis Center (DNAC); and David McAdams, professor of business administration and Economics.

Along with colleagues David Rasmussen, assistant professor of entomology and plant pathology at NCSU, and Michael Emch, professor of geography and epidemiology at UNC, they plan on investigating the “pandemic life cycle” from its origins in areas of close human-wildlife contact, its initial transmission through small social networks and its spread to regional, then national, then international areas.

Before becoming a pandemic, a disease-causing pathogen will slowly gain ground one infection at a time. It must infect one human, who has to transmit it to a second human, who will also start infecting other people.

How fast the pathogen spreads, and how far, depends greatly on how large and tightly knit the first group of infected people are, as well as on how far their connections spread geographically.

“A pandemic is a rare event, but it’s really the outcome of lots of earlier common situations,” said Moody. “What's obviously visible is the grand disaster, like we’ve learned all too well over the last three years, but it’s only made possible by the small ways in which our social world is organized.”

By examining how infectious diseases travel through human contact networks from a hyperlocal to a global scale, the team hopes to zone in on the methods and data needed to identify the early stages of spread and come up with new approaches to predict and control outbreaks.

“These really early stages of outbreaks are when control interventions are going to be most cost effective and most likely to succeed, but that's also the point that is hardest to detect,” said Meredith Spence Beaulieu, assistant director of TriCEM and senior personnel on the grant.

We have a good understanding of how people, and therefore diseases, travel within and between countries though airline, ship and traffic networks. But this data is still mostly restricted to global hubs and large, wealthy cities. Very little is known at the village level.

“The data we have is important for knowing where the disease is going to go once it takes over Berlin, for example, but we want to stop it way before it gets there,” said Moody. “Once that global network becomes relevant it's already too late.”

“We’ll focus on how to collect the right data to understand this cycle and design effective interventions at these early stages of spread, to hopefully prevent another global outbreak like we’ve seen with SARS-CoV-2,” said Spence Beaulieu.

The team’s main goal isn’t to come up with all the answers, but rather to assemble a group capable of harnessing data from multiple fields and in multiple scales to come up with new methods for identifying potential sources of global pandemics at the initial outbreak stage.

“We have to bring together a lot of different disciplines, whether it's statistics, or economics or behavioral decision making and engineers: everyone thinking about how information flows on these networks, how it changes people's behavior, how it informs the medical establishment, how can we channel all of that information and come up with useful ways to understand it,” said Nunn.

To accomplish this goal, Nunn, Moody and McAdams have already begun collaborating with a group of anthropologists, sociologists, mathematicians, engineers, global health experts, epidemiologists, economists, geographers and veterinarians from across the Research Triangle.

Together, they aim to not only at obtain concrete results through a combination of preexisting data, computer simulations and mathematical modeling, but also to turn the Research Triangle into a hub for the study of pandemic prevention.

“We’re really aimed at laying the foundations for building a successful center in this topic,” said Nunn. “There are going to be events to bring together an even larger pool of students, faculty and postdocs to really build these interdisciplinary connections, but also to identify new directions to take.”

“This is just the nucleus of what we hope is going to be a much bigger research network,” he said.