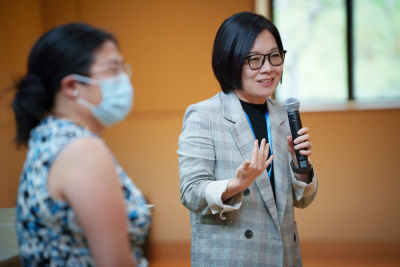 In her new book, "Made-Up Asians: Yellowface During the Exclusion Era," Esther Kim Lee traces the history of yellowface from 1862 to 1940 — a time when Asians faced legal and cultural exclusion from immigration and citizenship in the United States.

We sat down with the professor of Theater Studies, International Comparative Studies and History and director of the Asian American Diaspora Studies Program to talk about the book, why Hollywood producers would go to such lengths to avoid hiring East Asian actors and how this history shaped anti-Asian racism during the COVID-19 pandemic. This interview has been lightly edited for length and clarity.

What is life like for Asians in the exclusion era, and what’s the social context of the time?

The first wave of Chinese laborers arrived in large numbers on the west coast starting in the 1850s and helped build the first transcontinental railroad. After the end of the Civil War in 1865 and the completion of the railroad in 1869, anti-Chinese rhetoric intensified and culminated in the passing of the Chinese Exclusion Act in 1882.

Until the beginning of World War II, various legal decisions and laws prohibited people from other Asian countries from immigrating or becoming citizens. The Immigration Act of 1924, for instance, excluded immigration from a geographic area it defined as the “Asiatic Barred Zone.”

Tell us about the history of yellowface. When did it start?

I define it as a non-Asian actor performing an East Asian role. If you define it that broadly, the history goes back quite a bit in Western theater history. Even during the Shakespearean era there were plays about Genghis Khan, for example, and one could imagine that English actors played Asian roles at the time.

Throughout European theater history, Asian characters were popular. That tradition was imported to the to the Americas as early as the first arrival of Europeans.

How does yellowface evolve in the US context during the exclusion era?

In the 1870s, there's a play called “Ah Sin” written by Bret Harte and Mark Twain. Its title character is similar to a British character type that was known as “the stage Chinaman.” It was imported from British pantomime, and the character came from a clowning tradition, in the way we understand clowning — white paint, colored wig, bright costumes.

What happened in the United States is that the character type detached from its British tradition of pantomime. It became a more realistic character, like the audience was supposed to see the character almost as a real Chinese person. Mark Twain argued that Ah Sin was as real as it got. To paraphrase him, he said, “I’ve seen Chinese men in California, and I’m representing the most real version I could conjure up with this white actor.”

So audience members, many of whom had never seen Chinese people, were told that Ah Sin was a real representation of a Chinese person. But what they actually saw was recycling of the same stock, clown character. I call this type “clown yellowface” in my book.

You reviewed a lot of primary sources as part of your research. Did you find anything in particular that highlights how yellowface developed?

There is a kind of makeup product called greasepaint — it’s the precursor to cosmetic foundation. I found some greasepaint sticks on Ebay. There were old and smelled weird. They’re labeled “Chinese” and “Japanese” and they’re slightly different shades: Chinese is orangish brown and Japanese is grayish brown.

It’s interesting how actors tried their best to look like “real” Asians and even distinguishing between Chinese and Japanese characters. Just imagine having a foundation bottle named “Chinese” — that’s what that was like.

What do you take away from that? How did you react to it?

I felt a sense of obligation in making sense of the makeup history. Why is it that white actors — they were almost all white actors — went the distance that they did to portray Asian people, or what they imagined as Asian people? It’s extraordinary.

In early film studios, there were actual laboratories built to create yellowface, and there are many strange anecdotes. For instance, the actor Akim Tamiroff, who is a Russian immigrant of Armenian descent, had deep-set eyes, and his makeup artist didn’t think he could make his eyes look “Chinese.” But he was cast to play a Chinese general in the film “The General Died at Dawn” (1936).

What the makeup artist did ultimately was to take the cast mold of a well-known Korean actor named Philip Ahn — they thought he was Chinese — and put that mold on Tamiroff’s eyes to create the “Chinese” eyes. But Ahn played his henchman in the film, and they were side by side in many scenes! It was just fascinating trying to get into the minds of the people who were doing this. What was their logic?

Well, what is the logic? Why would they go to these lengths?

My book, I realized, ended up not really being about yellowface but about whiteness in American acting, because that's the only way I can answer the question.

This is the same era when we see the rise of The Actor — with capital T, capital A — that the American audience could accept as being able to represent the universal human experience. In other words, American acting was defined through whiteness.

The title of the book, “Made-Up Asians,” means many things: it refers to makeup but also to fictional Asians. The idea of Asia was also made up. But whiteness was also being made up, because the concept of whiteness kept changing throughout U.S. history and in acting history.

In acting, what that often meant was that the actor with so-called Anglo-Saxon look — blonde, blue-eyed, beautiful — was seen as having the capacity to portray the full range of the human experience. Not every actor got to do that because “ethnic” actors in the nineteenth century could only play themselves or only play comical roles or roles that paid less, like extras or secondary roles.

If you were accepted into this industry that considered you qualified as The Actor, you had access to more money, fame and roles, including nonwhite ones. Yellowface was one way to exclude Asian actors to the benefit of white actors. It was a gatekeeping device. It perpetuated a caste system in the acting industry. 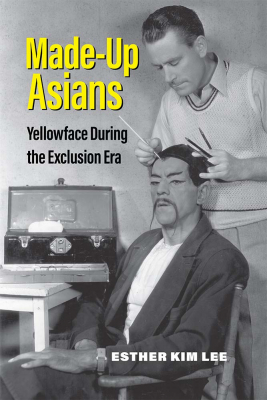 What impact does this history have today, especially given the rise in anti-Asian violence during the COVID-19 pandemic?

One thing that I found surprising in my research was how different types of yellowface in the United States were invented to represent Asians as people to be excluded. Often Asian characters were seen as foreign, living in faraway lands. Asian American characters were rare.

During the 1920s and ‘30s, when Asian exclusion was at its height, we see characters like Fu Manchu, the evil genius doctor who has multiple degrees from Western universities, determined to destroy the white race. He represented the “yellow peril,” which means the West’s existential fear of the East. This is the term we are using now to explain anti-Asian violence.

The cover of my book features Fu Manchu as embodied by Boris Karloff, who is being made up by Cecil Holland, the first makeup artist in Hollywood. And what you see is the prosthetic eye that we associate with yellowface makeup. We have to remember that Fu Manchu is a monster. And Boris Karloff specialized in monster characters; he played the mummy and Frankenstein’s monster in early films.

This prosthetic eye was invented in Hollywood makeup studios to portray Asians as monsters, and it was repeatedly used for all Asian characters even if they were not monsters. The technology specific to the monster character was borrowed to represent the entire race of East Asians or “Orientals,” as they were called. I discuss the “oriental eye” in the last chapter of my book.

There’s an ongoing debate about improving casting diversity in Hollywood right now, most recently around Disney’s live-action remake of “The Little Mermaid.” Do you think this history could help clarify those debates?

I see casting as a symptom, not the cause of racism in acting. We have to think about the structure of the acting industry, how the acting world operates, how The Actor gets created. Without understanding that structure, we’ll never understand what’s happening with casting.

For decades, we’ve been told that the only type of actor who could portray the entire human experience is the white actor, and the other actors don't have the talent or the capacity or the personality. With that, of course we get the symptom of the casting controversy we see.

When the question is, “Why is there a Black mermaid,” we are stuck talking about the race of the actor. But we have to take a step back and ask: Who got to play the mermaid historically (which is a completely fictional character, by the way)? And why? Unless we understand the history of acting, we’ll never be able to go beyond casting controversies that never seem to go away.

I dedicate my book to Asian-American actors. I wrote it for them. Controversies around casting and yellowface have persisted throughout U.S. history, and I felt frustrated every time Asian American actors had to deal with them. I wrote the book to empower them, to give them the historical knowledge, and to help them survive in an industry that has kept the gate closed on them.