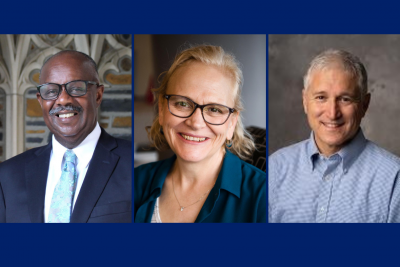 Professor of Political Science Kerry Haynie has been named the incoming Dean of Social Sciences for Trinity College of Arts & Sciences and Professor of Biology Susan Alberts will begin her term as Dean of Natural Sciences next year, Dean Valerie Ashby announced this spring.

Haynie is currently the chair of the Department of Political Science, and he led Duke’s Academic Council from 2019–2021. His research focuses on the examination of how underlying structures and practices of American political institutions affect African Americans and women’s efforts to influence the political system.

“Kerry’s commitment to mentorship and to diversity as a means of achieving excellence will be key to his success in the new leadership role,” Ashby wrote in the announcement. “He has a broad view of the social sciences and a strong record of engagement with his faculty peers both in Trinity College and across Duke.”

Haynie’s appointment follows the term of Rachel Kranton, James B. Duke Distinguished Professor of Economics, who has served on the Trinity leadership team since 2018. Haynie will step into the role July 1.

Alberts, who is the Robert F. Durden Distinguished Professor of Biology and chair of the Department of Evolutionary Anthropology, will join the Trinity leadership team in July 2023 as the next Dean of Natural Sciences.

Recently elected to the National Academy of Sciences, she studies how animal behavior evolved in mammals, with a focus on the social behavior, demography and genetics of the yellow baboon.

“(Susan) has become a recognized leader in Trinity thanks to her ability to thoughtfully deliberate complex issues and she has been a staunch supporter of her faculty, staff and students,” Ashby noted in the announcement. “I have no doubt that Susan will bring that same excellence in leadership to her service across the natural sciences.”

Because Alberts’ term does not begin for another year, Professor of Statistical Science Jerry Reiter has been appointed interim dean of Natural Sciences for one year beginning July 1, replacing Mohamed Noor as he becomes interim dean for Trinity.

Reiter is in his fourth year as chair of the Department of Statistical Science, having previously served as associate chair from 2016-2019.

His research centers on methods for preserving data confidentiality, handling missing values, integrating information across multiple sources and the analysis of surveys and causal studies. He frequently collaborates outside his department and across Duke due to his deep appreciation for encouraging the application of statistical methods in social sciences, medicine and beyond.

“Jerry has been an outstanding chair and is a thoughtful leader who cares deeply about teaching, research and service,” said Ashby. “His presence on the team will provide essential support for the Natural Sciences during this transitional moment for Trinity.”