The History of Violence Against Asian Americans 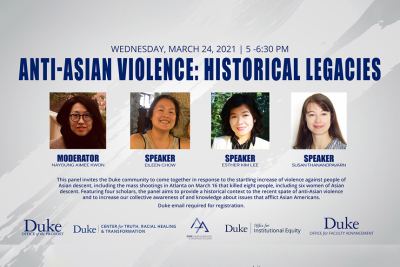 A March 24 panel discussion in response to the increase of violence against people of Asian descent, including the mass shootings in Atlanta earlier this month, attracted more than 670 Duke faculty, staff and students.

Syllabus on Asian-American History and Culture

In response to recent acts of violence against Asian Americans stemming from a long history of anti-Asian sentiment in the United States, Duke University Press has posted a collection of books and journals that explore the experiences of Asian and Pacific Americans.

“The topic of this symposium is so important,” Provost Sally Kornbluth noted in opening remarks, “but the recent incidents that have called forth the urgency of this topic are heartbreaking.”

Kornbluth expressed gratitude to the presenters for educating and bringing together the Duke community in a moment of pain. “Sadly, I don’t think that simply understanding history will prevent these heinous acts,” she said, “but knowing the roots of this awful prejudice is necessary if not sufficient to work to eliminate it.”

“In the wake of this murder, some of the uninformed media coverage and surrounding conversations revealed, yet again, that the U.S. and many of our own communities lack the basic knowledge about the ongoing history of violence against Asians and Asian Americans in this country. This is not an isolated incident involving one man having a ‘bad day.’

“Let’s be clear: America’s anti-Asian problem goes back to the 1800s with the arrival of first labor migrants from China, explicitly brought in to exploit their labor in indentured servitude in the aftermath of the emancipation of African slaves. This was followed by endless American-led wars – militaristic and economic trade wars – that relentlessly vilified different Asian countries every few years as the new enemy du jour.

“The origins of the Asian American diaspora itself have direct legacies to the long histories of occupation, colonization and wars in Asian countries, such as the Philippines, Korea, Vietnam and elsewhere. Very few Americans have been taught this foundational American legacy in our history classes, including at our own universities. Many waves of Asian immigrants come directly out of these violent histories and are racially marked with a perpetual foreigner status here, even generations later. Sentiments of hate and violence that erupt in small and big ways are symptoms of America’s unacknowledged centuries-long addiction to Asian competition and Asian hate.”

“I’ve been in a lot of conversations this week and last, talking specifically about the lives lost in Atlanta, and the first question that always comes up is, how do you feel?

“How do I feel? I was sad, I was grieving, I was angry. I felt this great loss. I identified with the women, many of whom were my age or my mother’s age. And I was at a loss for words at various moments. What I wasn’t was surprised.

“For a lot of people in the Asian American and Asian community, we’ve been waiting for the other shoe to drop. It’s been a year – and also many more years before that – of escalating rhetoric against Asians, a kind of dehumanizing, trivializing rhetoric against Asians in America. Was it any surprise that it would end in stoking someone into violent action? Part of why we share and why we learn is not to be surprised … so as not to say, ‘this is not normal’ and ‘this is not America,’ because it is both normal and America. It’s hard-baked into the American story.

“What matters going forward, I think, is how we build on this grief and anger and history to create new stories, new possibilities for care, new ways of taking action. This past week, I have been struck anew by the Korean American writer Alexander Chee’s admonition: 'Write for your dead. Tell them a story. What are you doing with this life? Let them hold you accountable.' Not only for those you love, Chee reminds us – but write also for 'the ones who are coming for your life.'”

“[There are] three tropes on which I suggest that anti-Asian violence rests: historical erasure, nativistic racism and sexualized identities. All of these tropes ultimately rely on the idea that Asian Americans are inherently alien to the United States, an idea crafted through laws stretching back 150 years.

“The identity that we call Asian American is not necessarily something that we would prefer to have; like everyone, we just want to be human. But we have to have the label to be made visible, because otherwise, individually we’re not visible. So it is a socially constructed identity that was coined in 1968 out of frustration of various kinds of discrimination and lack of visibility of different groups.

“Coalition-building is at the core of this identity, and that is something that I see that my students are hungry for. They really need to feel like they belong at Duke, that they belong in the U.S., and this is the mission of this construction of identity we call Asian American but also of the Asian American & Diaspora Studies program.

“I think Duke is in a unique position to lead the change, the new future. And if we get some support for Asian American studies, we have people who are willing to do the legwork. I’m willing to do the work. I think Duke, as the first university to establish a program in Asian American Studies in the American South, can become the leader, not only in Asian American studies or ethnic studies or area studies, but the study of trends in the U.S. and in transnational global patterns. So I want to say, as devastated and as difficult as it is to open up and talk about these things, I do want to underscore that this is an opportunity for us.”