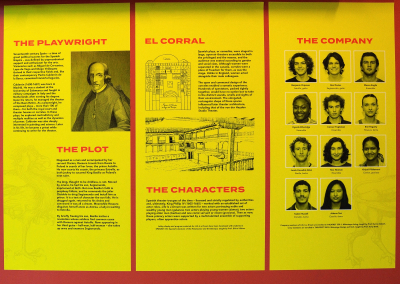 Material created by students in SPANISH 410 (Suspicious Truths and Alternative Realities: Spanish Literature of the Renaissance and the Baroque) was used for a “Life Is a Dream” lobby display in the Rubenstein Arts Center. (John West/Trinity Communications)

When you read a play from the early 1600s, are you reading a literary artifact or a blueprint for a live production? Is the dialogue better understood by analyzing the text or acting it out? What’s more important: the tropes of the era or the architecture of the theater it was first performed in?

The answer to all of those questions is both, and a collaboration between the departments of Theater Studies and Romance Studies will show why when a new production of Pedro Calderón de la Barca’s famous play “Life Is a Dream” opens on Thursday, March 24.

The project began last year, after a committee of Theater Studies faculty and students selected “Life Is a Dream” as the department’s spring Mainstage performance.

Department Chair Darren Gobert was selected to direct the play. An expert in early modern French theater, he has close ties to Romance Studies, and a friend there put him in touch with Elvira Vilches, an associate professor of Romance Studies and an expert in Spanish literature of Calderón’s time.

“It was a love match at our first meeting,” Gobert said.

Ultimately, the scholars decided that Gobert and Juliana Kleist-Méndez — this year’s Theater Studies artist-in-residence, hired in part to support the production of “Life Is a Dream” as a fluent Spanish speaker— would lead two workshops each as part of Vilches’ upper-level class Suspicious Truths and Alternative Realities: Spanish Literature of the Renaissance and the Baroque.

An accomplished acting teacher, as well as a director and choreographer, Kleist-Méndez taught the literature students how to embody the text they studied. Under her guidance, students performed monologues solely through their body language and by using certain positions for each punctuation mark on the page.

“That was incredibly effective for the students,” Vilches said. “What was fascinating was to see the process of embodying. It was the first time I had the experience of really paying attention to how you feel the idea. How do you feel the feeling?”

Gobert provided expertise in understanding the play as both material history and as a blueprint for a contemporary director to use. “You read in very different kinds of ways” when doing each, Gobert said.

“When you’re looking at a text as a historical artifact, you’re trying to unearth all the clues that it could teach you about the way it looked at the time it premiered,” he explained. The process involves examining box office records, sketches of the theaters it was performed in and contracts signed by the original production companies. Combined, those factors elucidate the material constraints Calderón was working within.

But as a director staging the play today, Gobert faces very different conditions. To take just the most obvious examples, Duke’s production can make use of electrical lighting, but also has to abide by COVID safety precautions. Gobert’s goal was to teach students how to understand those differences — and the creative possibilities they enable.

At the core of any performance, however, is understanding the characters and their motivations, and Vilches and her students were the experts on that aspect. Reading the text in the original Spanish, they were able to provide the in-depth context and translation notes that Gobert needed.

“I wanted the dramaturgical support they could offer,” he said.

Vilches was also able to provide insight into the literary tropes of Spanish theater, which differed significantly from the French and English theater Gobert specializes in. For instance, Calderón was required to write for a specific troupe structure using a precise number of actors: two young men (galanes), two older men (barbas), two young women (damas) and a clown (gracioso).

The class also provided public humanities work, writing educational text on those topics for both the play’s program and a large display housed in the lobby outside of the von der Heyden Studio Theater in the Rubenstein Arts Center.

All parties involved agree that the collaboration was a success.

“It felt like we were forging a real connection between the two classes: Elvira’s students were making physical discoveries as a result of close reading and Darren’s class was getting deeper into the history of the piece,” Kleist-Méndez said.

That mutual education is always the goal of Theater Studies’ Mainstage productions, Gobert added. “Our vision for Mainstage shows is that they’re knitted to the university, so we’re always looking for these kinds of collaborations.”

For Vilches, the result was a chance to bring out the relevance of a 400-year-old Spanish play. “It was a wonderful opportunity to learn about this Spanish classical filter on society, and show that they were already wondering about the questions we are grappling with right now about whether we can trust our senses, our perceptions, our sources of information,” she said.

The one question she has left is what Gobert’s production of “Life Is a Dream” will look like.

“We were very curious about what Darren will do with the play, but he didn’t say much,” she explained.

On Thursday, she’ll find out with the rest of the audience.

Life Is a Dream will run March 24–26 and March 31–April 2. All shows are at 8 p.m., and tickets are available from the Duke University Box Office.