J.P. Gritton Reflects on the Ubiquity of the Mystery Genre 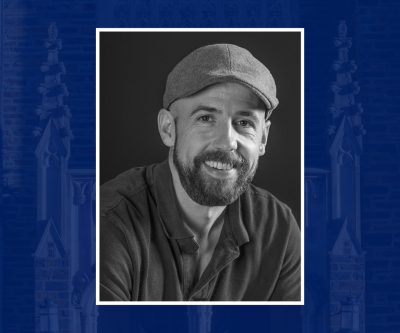 The assistant professor of the practice in creative writing has since changed his mind, not only teaching students to appreciate the role of the genre but incorporating the hallmarks of mystery writing into his own works. His debut novel, Wyoming — a Kirkus best debut book of 2019 — tells the story of a struggling Colorado man in the 1980s through the blending of mystery, crime and literary fiction elements.

In a recent interview, Gritton reflects on a mystery writing course he taught during the fall semester and what he hopes students take away from his courses.

What made you want to teach a mystery writing course?

As a writer, it was not a form that I was that much interested in, but I heard in a writer workshop that the mystery form is the fundamental form of storytelling. At the time you think “this is ridiculous,” and the kind of thing that writing professors say to sound smart. Eventually, the more I read, the more I started to recognize there was a lot of truth in it. So the idea for the class grew out of this interest and using the tropes and “moves,” so to speak, of mystery writers, and trying to apply those to the work of people who are writing literary fiction.

What makes mystery writing different from other forms of fiction?

This actually became a joke in the class where we realized there is really no distinction.

The notion of a genre is something that gets invented by people who work in publishing houses and are trying to market a book in a certain way. In the Harry Potter series – take The Sorcerer's Stone – it is a gradual unraveling where you realize “oh, this is how Voldemort has disguised himself.” I think that in the structure of the mystery – the body on the floor, the series of turns and reversals, the clues we acquire as the reader – every writer that is writing good fiction knows how to throw those punches in a good way.

Would you consider your book Wyoming to be a mystery novel?

What we have talked about in the class is that there has to be some type of differentiation between a mystery and a thriller. In my novel, there is a crime that happens very early in the novel, but you won’t hear about it until the very end. So in that sense it is a sort of mystery in that it’s a protagonist who is slowly falling apart. You are not totally sure why, but you have three good guesses that the reason he is wrecked is because he committed a horrible crime. Maybe you could call it crime fiction.

Where do you most often draw inspiration for your courses?

Usually, it grows out of my writing. Whatever I am obsessing about as a writer is what ends up becoming what the class gets themed about. At Duke I teach essentially three courses – intro to fiction, intro to creative writing, and intermediate fiction. In all those classes, I am saying similar things but I am looking at different texts that help me arrive at the same answers.

The inspiration for the theme for my Intermediate fiction workshop (“Writing the Body”) grew out of a failing I was noticing in my own writing: though I usually did a good job helping readers understand how a scene looked, I seldom shared details that grew out of other sensory details (how a given place smells, tastes, sounds, and so forth).The theme for the class’s readings are those stories in which the body itself becomes a sort of character (Jo Kyung Ran’s “Looking For the Elephant,” in which a character is sort of entrapped by her body, might be an example). I’ve got a session planned for the Durham Food Hall, and another in which students will learn the rudiments of capoeira, a martial dance invented by enslaved people in Brazil. I’m really excited to see how these “embodied” experiences impact my students’ and my writing.

What advice do you give to your creative writing students? What do you hope they take away from your courses?

The thing I try to get across is to try and keep at it. When I was in graduate school, everyone that I knew wanted to be an actor, an artist or a writer. These were the people I hung out with and we all inspired each other. As time has gone by, more people have found a way to market their “artistic” skills. Those who were strong visual artists sometimes became (for instance) graphic designers. Those who were strong writers went to law school. Those who were passionate about film do freelance editing. On the weekends and in the evenings, they’re working on their novel manuscripts or making their own art or whatever. I want my students to leave my class understanding that their art will always be there for them.

Students who are interested in mystery writing can take Gritton’s intermediate fiction writing workshop “Writing the Body” in Fall 2022, where he builds on many of the ideas taught in his introductory course.