Latinx in the U.S. South: Scholars from Duke, UNC Discuss the Complexity of Identity, History and Language 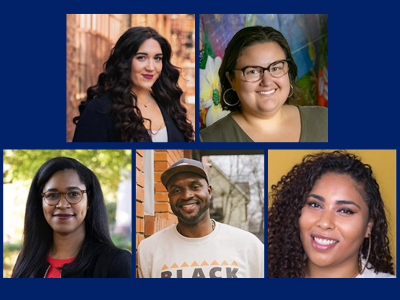 An unconventional National Hispanic Heritage Month panel held Oct. 12 at Duke unpacked and thoroughly discussed many complexities found within the Latinx identity, particularly for those living in the U.S. South.

Its organizers aimed to shine a light on growing academic expertise on Latinx issues in the Triangle, while also urging Duke and surrounding institutions to reinvest in regional histories that provide an architecture for understanding the challenges and opportunities we face today.

“To me this feels like the best Latino Heritage Month conversation you can have,” said Cecilia Márquez, the Hunt Family Assistant Professor of History, who was both an organizer and participant in the panel discussion.

The panel was moderated by Sarah Bruno, an ACLS Emerging Voices Race and Digital Technologies fellow in Cultural Anthropology and the John Hope Franklin Humanities Institute at Duke. In just over an hour, she led the group through a series of prompts ranging from the over-emphasis on migration narratives to anti-Blackness to the language we use to discuss people identified as Latinx.

“The way we look at Latinos today is actually a fairly new invention,” Márquez noted. “The increased coalescence and coherence of Latino as a really firm category only serves to police who is in and who is out. I think we could let go of the grip of it a little bit and I think we would all be better off for it.”

Javier Wallace – a postdoctoral associate with African & African American Studies at Duke – later questioned how even the South is defined.

“We also have to disrupt these notions of what we think the South is,” he said. “Is it geography, the way people talk, the way trees look? Or is it Jim Crow and the way it affected (people) in Miami in the same way as in Mississippi and in Austin, Texas?”

From health to music to sports, many aspects of Latinx-related research emerged during the conversation. Panelist Javier Wallace’s research focuses on race, class, gender, labor migration, nationality, and the transnationalism of athletes from the U.S., Latin America and the Caribbean.

Meanwhile, new Duke faculty member Sophia Enriquez, an assistant professor in Music, is a scholar, educator and practicing folk artist working at the intersections of Latinx and Appalachian cultures.

“This (Appalachian) region has been defined as a white, backward, impoverished monolith…among it being a resourcefully-rich region with oil and coal,” she said, so the complexities and diversity of that region are often overlooked. Her work engages musicians who are Latino and performing Latino music traditions in the Appalachian region as well as those who claim “a fusion agenda” and may combine a bluegrass tune with a Cumbia.

Deshira Wallace, assistant professor in Department of Health Behavior at the UNC-Chapel HIll Gillings School of Global Public Health, discussed the challenges of having limited health data about Black Latinx people, in particular. She noted that researchers can often access health information from patients in the Southwest, California or New York that get generalized as applying to all Latinos.

“My experiences are different than different people on this panel, because of different, intersectional (reasons),” she added, and urged health providers and researchers to center Black Latinx and indigenous Latinx people to make sure programs serve them well.

Blackness within the Latinx community drew a lot of discussion – both in the ongoing rejection of it and the impact of white supremacy in all of their respective research areas.

“I find migration an often-over-emphasized part of the (Latinx) story,” Márquez said early in the discussion. “There are actually long-standing Latino communities in this region who have a claim to this region and a claim to the South…who are invested in all the parts of the South, good and bad.”

She summarized the history of Latinx people in the U.S. this way: “The story is basically white institutions and white people being faced with an ambiguous racial population…and being able to affirm over and over again their commitment to anti-Black racism.”

An example she gave was Latinos having to make “explicit racial choices” about which restrooms to use during Jim Crow. She said she has heard through her research, “I’m not Black so of course I chose the white entrance.”

“People don’t show up in the U.S. without ideas about whiteness, Blackness and indigeneity,” she later added.

“Is white supremacy ever not super loud in the work that we do?” Deshira Wallace asked her fellow panelists, noting that even during “quiet periods” there were efforts by eugenicists to establish “why white people were better than primarily Black people and then also non-whites in general, legitimizing it through statistics.”

“Like a white noise machine, it’s always there,” she continued. “And you have to remember to listen to it.”

Enriquez noted that regarding her work in Appalachia, the presence of white supremacy included the identification of the banjo as a white instrument, when its roots are in the African diaspora.

Throughout the hour, no topic was off the table and the energy that participants had for this subject matter and their respect for each other was clear.

“I’m afraid of where we’re going and particularly where Latinidad is going in the United States,” Javier Wallace said. “I think of all of the applications that will happen when Latino becomes an official racial category…as someone who does not fit comfortably within this definition.”

He described standing in a line at the store where a woman was greeting everyone in Spanish except for him, a Black man, with whom she switched to speaking English. It recalled the concept Deshira Wallace raised of “street race” – what race do people think you are when they see you, and how does that contribute to discrimination and discriminatory practices.

Márquez noted that “as a historian, those small moments are really important to the way we make race and make meaning about race.”

“I think it’s so important to continue to engage in these critical dialogues and not just have them as a one off, but let them sink in and…think about how we care for each other,” Enriquez noted during her closing.

In addition to the departments and institutes represented by the speakers, the event was also co-sponsored by Duke’s Forum for Scholars and Publics and the Center for Latin American and Caribbean Studies.