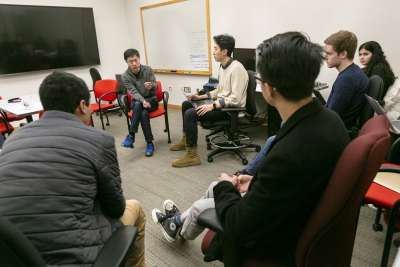 As Siri, Alexa, Google Assistant, and other AI-based digital programs become more common, so does a shared frustration: Speaking with them is shallow and artificial. This is a sign of a deeper struggle with technology’s ability to understand the nuances of human language.

To address the root of this issue, among others, Duke’s Computer Science department and Linguistics Program have launched a new interdepartmental major targeting the intersection of these two fields. This new major is one of three such programs in the United States.

It is no accident that the disciplines of linguistics and computer science found each other. It began with collaborations between linguists and computer scientists at IBM in the 1950s, and later in the 1960s between the U.S. Department of Defense and MIT in the early days of machine translation. The intellectual collaborations moved to a new level with the appearance of the cognitive sciences, where the original four disciplines were psychology, philosophy, linguistics and computer science/AI. This new interdisciplinary major comes at an important moment in a new phase of interest in not only machine translation, but also natural language processing.

Companies have struggled to improve language-based technology because few developers and engineers have the linguistics training they need to understand how humans speak. “Computing in the past was focused on how to make things go faster at lower costs,” said Jun Yang, professor and associate chair of Computer Science. “But nowadays, a lot of it is about criteria that many computer scientists haven’t thought hard about. What does it mean to have a good conversation? How do you communicate with people?”

Because it involves research on the structure of languages and an understanding of related cognitive functions (as well as many other subfields), linguistics is especially well suited to answer those questions. “Researchers are interested in developing technologies that can handle a wide variety of languages with many dialects and written in different scripts,” explained Abbas Benmamoun, professor of Asian & Middle Eastern Studies and Linguistics and vice provost for Faculty Advancement, who was involved in the creation of the new major.

The LIN+CS/CS+LIN major opens the door to a wealth of opportunities. Not only does the major prepare students for working on AI assistants at Apple and Google, but it also offers the background to tackle fundamental research questions and employment opportunities in a variety of industries.

Yang offered his own project with Duke’s DeWitt Wallace Center for Media and Democracy as an example: it uses AI to fact check news sources and detect propaganda, with clear impacts on the world of journalism and politics. There are also job opportunities in business, marketing, and healthcare, where companies build automated customer service call centers, monitor social media for market intelligence or public health concerns, and mine clinical notes for personalized and predictive medicine.

If linguistics can aid computer science, the reverse is also true. “Understanding the importance of ecologically valid protocol design, incorporating multivariate analyses of covariance between activation data and empirical behavioral data, and having the appropriate programming skills are all critical for processing and analyzing neuroimaging data,” said Edna Andrews, professor of Linguistics and Cultural Anthropology and chair of the Linguistics Program.

The Andrews Neurolinguistic Lab, in conjunction with the Duke Brain Imaging and Analysis Center and the Duke Institute for Brain Sciences, is conducting two neuroimaging studies using fMRI, DTI and resting state fMRI to study questions of building cognitive reserve in expert musicianship and lifelong bi- and multilingualism.

There are also practical social issues that languages bring up in technology. Computer programs must work for people of different backgrounds, and that requires learning how to communicate across cultures. They must be user-friendly and fair, which requires attention to other complicated social issues that sociolinguists research. “Duke is a great place for that because we have a long, great liberal arts tradition,” Yang said.

Because of Duke’s interdisciplinary culture, many students in both disciplines were already exploring the other. Faculty and graduate students are pursuing cutting-edge research at the fields’ intersection, and curricular programming like the Natural Language Processing Winter School provided some opportunities for aspiring students. The new major is designed to make it easier for undergraduates to go deeper by defining specific programs, so they don’t have to create their own. “Maybe there’s a way for us to pave out this pathway for them to make sure there are opportunities from the get-go,” Yang said.

“As we grow more accustomed to technologies that require voice recognition, grounding in phonological, morphological, semantic, and discourse-level analysis will give our students a leg up,” Andrews said. “All of this is deeply rooted in hierarchical language structures and variation. To extract forms, you have to understand how language works. Linguists will be great for those jobs.”

The computer science training will also aid students who hope to work in linguistics or specific language areas. “Bringing the two types of expertise together will enable students to combine deeper understanding of how language works and the similarities and differences between languages and background in computational tools to work on human language,” Benmamoun said. The fact that Duke has strong language and culture departments from a number of areas—including Asian & Middle Eastern Studies, German, Romance Studies, and Slavic & Eurasian Studies—creates additional opportunities, he added.

“There’s no question that people with the skill set in this intersection of computer science and linguistics are highly sought after,” Yang said. “But universities are slower in catching up in teaching this type of expertise.” There is much research work in the area, he said, but few specialized undergraduate programs. With the interdepartmental major in linguistics and computer science, Duke is committed to staying ahead of the curve.

“There is already excitement for this new major from students,” Andrews said. “It has been a very enthusiastic response.”

The design of the new 14-course major provides new opportunities for deep multidisciplinary study. Students take 7 courses from each department, with built-in pathways to accommodate specific interests and background knowledge.

The core courses in linguistics cover:

Through electives, students may pick courses that are more focused on their particular topics of interest, including:

More information is available on the Computer Science and Linguistics Program websites.