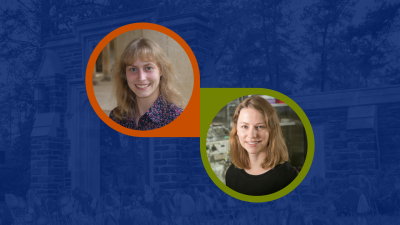 One is a chemist attempting to prevent malaria infections. The other is a mathematician working to understand one of the most mysterious problems in her discipline. Both were named 2021 Sloan Research Fellows.

Emily Derbyshire, assistant professor of Chemistry and Molecular Genetics and Microbiology, and Jessica Fintzen, assistant professor of Mathematics, were among the 126 recipients of this year’s Sloan awards, which recognize early-career scholars “of distinguished performance and a unique potential to make substantial contributions to their field.” The two-year fellowship includes a $75,000 prize.

“I’m honored, humbled and surprised,” Derbyshire said. “They recognize really outstanding people in really diverse fields, so it feels special to be among that group.”

Fintzen—who joined the Duke faculty this year—learned she had won the award while attending a Duke workshop from England. “I was super happy, but I couldn’t really digest it because I had a lot to do,” she said.

In addition to her position at Duke, Fintzen is a Royal Society University Research Fellow and lecturer at the University of Cambridge, and is spending the year participating remotely in Special-Year Program at the Institute for Advanced Study. Her time is also filled with activities aimed at supporting and mentoring early career mathematicians and widening participation, many in connection with a recent National Science Foundation CAREER grant. And amidst it all she has the small task of trying to make progress on a problem that would be a groundbreaking advance in mathematics: the Langlands correspondence.

Not yet fully understood, the Langlands correspondence provides a theoretical bridge between two disparate areas of mathematics: number theory (the study of integers and prime numbers) and representation theory, which involves studying complex objects by representing them with simpler objects like matrices. “These two areas are very different, but you can do explicit experiments on both sides and get the same number,” Fintzen said. Perhaps the most famous example is Andrew Wiles’ 1994 proof of Fermat’s Last Theorem, which drew on the correspondence.

Drawn to this mystery as a Ph.D. student at Harvard University, Fintzen wrote her dissertation on a smaller, connected problem within representation theory, which provides the foundation for the Langlands correspondence. “If we want to understand the bridge, we first have to understand what’s on each side,” Fintzen said.

END_OF_DOCUMENT_TOKEN_TO_BE_REPLACED

She focused on p-adic groups, which are matrices associated with a prime number. In order to understand how those groups work, Fintzen broke them apart into smaller pieces—using a method known as the Moy-Prasad filtration—and then proved that the structure of those smaller pieces is independent of the associated prime number.

“The interesting thing is when you look at p-adic groups, you usually only look at one prime,” Fintzen explained. “But you can do this for all prime numbers.”

In a 2021 paper published in the Annals of Mathematics, Fintzen proved that the representations of these p-adic groups have a particularly nice shape for all primes “of a sufficient size.” Now, with the support of the Sloan fellowship, she hopes to prove it for smaller primes as well.

If she succeeds, mathematicians will gain essential insights that will help complete the bridge between representation theory and number theory.

Preventing malaria from the start

While she was a postdoc at the Harvard Medical School, malaria was killing hundreds of thousands of people across the globe. Yet profit-driven drug companies weren’t investing in malaria research—or related parasites like toxoplasma—so Derbyshire decided to utilize the resources an academic institution offered to study the disease, searching for new druggable targets that can prevent infection.

“We’re interested in understanding the path through which the parasite goes into our cells and starts restructuring the entire environment,” Derbyshire said. “What does the parasite do to the host? What does it need from us?”

Unlike most researchers, Derbyshire’s lab is answering that question by looking at both the parasite and the human. “We try to discover what it is about ourselves that enables the parasite to invade and replicate and cause disease with the hopes that we can find something we can leverage to protect ourselves against that.”

The approach has led Derbyshire to focus on an “under-theorized” step in the infection process, when the parasite was thought to be dormant. Some species of parasite can live in the human liver for days or weeks before they begin infecting blood cells, which is when symptoms begin. But by investigating the earlier stage, Derbyshire hopes to find a prophylactic treatment that can prevent symptoms in the first place.

“We’re observing that there are actually things that the parasite is doing during that seemingly dormant time,” she explained. “This is really the last hurdle for malaria eradication, because there are so few drugs that can clear these dormant parasites.”

Because the Sloan award offers unrestricted funding not tied to a specific research question, Derbyshire said it will allow her to explore new avenues. “It gives us a freedom to explore some of our more daring ideas,” she said.