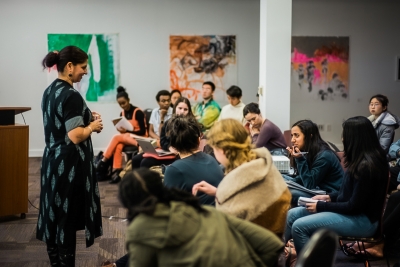 For many, the past decade has created new awareness of gender and sexual politics. North Carolina’s HB2 was just one of the many flashpoints that spurred a movement. And it wasn’t just happening in this country.

“This is a time when there’s been a lot more attention to transgender rights and transgender activism, both in the U.S. and, pretty famously, outside of the U.S.,” said Jocelyn Olcott, a professor of History and chair of Gender, Sexuality & Feminist Studies (GSF). There have also been ongoing battles over abortion rights, how systems respond to sexual assault and more.

Perhaps because of that climate, GSF noticed a growing number of students who wanted to add a global perspective to their studies in gender and sexuality. And many students in International Comparative Studies (ICS), which emphasizes transnational approaches, were drawn to gender questions. Now, the two departments have launched a new interdisciplinary major to better support their overlapping concerns.

Called Global Gender Studies, the new major “offers a focused curriculum drawn from transnational and global studies and transnational gender and sexual studies to explore gender, sexuality, and feminism in global, historical, and transnational contexts and across disciplines,” according to its official description.

Because of the requirements for each major, “It was surprisingly challenging for students to double major in ICS and GSF,” explained Kathryn Mathers, the director of undergraduate studies for ICS. Global Gender Studies solves that problem by laying out a pathway. Majors will take 14 classes total between the two departments, including two required courses from each.

That course of study allows students to do justice to ongoing work in the subject. “In a lot of conventional gender studies programs, transnational or global feminism is taught maybe as a singular standalone class, and more likely as a week or two in a larger curriculum,” said Jennifer Nash, the new director of undergraduate studies for GSF. “What is so promising about this major is that we can highlight and really think through the robust debates within transnational feminism,” including how to create solidarity across difference and how to think across difference without erasing it.

In doing so, students will critically examine their assumptions about gender. “It gives the students an opportunity to disrupt their taken-for-granted perspectives on their own worlds and the worlds of their families,” Mathers said. The global element means that students will pose interdisciplinary questions about empire, U.S. exceptionalism and other topics while they examine the construction of gender and sexuality. “It requires them to think very thoughtfully about where they are positioned and where other people are positioned,” Mathers added.

That training and perspective, faculty members say, will be essential for whatever careers students choose. “The world is on fire in every single way,” Nash said. “We need to be training students who can think gender, sexuality, race, nation and class side by side in complex ways at all times.” There are direct applications in fields that address (or create) inequalities and conflicts, including law, international development and healthcare. But perhaps more importantly, the major teaches a method for further examining the world. “It’s my hope we can train students to think about power and the variety of ways it works and can hide its workings,” Nash said.

The resulting tools and perspectives are useful preparation for a changing world where existing career paths are always in flux. “I am loathe to be at all prescriptive about what young folks go out and do in the world because they have so many more creative and interesting ideas that I ever would,” Olcott said.

But that just follows on Duke’s longstanding approach to interdisciplinary, liberal arts education. “I think it’s a really exciting opportunity to do a really interesting degree,” Mathers said. “Who knows what they will do in the end, but it’s an opportunity to really take advantage of what Duke has to offer.”