May 6, 2021 Update: Jonathon Yuly and his co-authors, including Peng Zhang and David Beratan, were awarded Proceedings of the National Academy of Sciences's 2020 Cozzarelli Prize for their paper on electron bifurcation. The award is given annually to six research teams whose articles have made "outstanding contributions to their fields."

You can hear Yuly describe the paper in the video above or in an episode of PNAS's Science Sessions podcast. 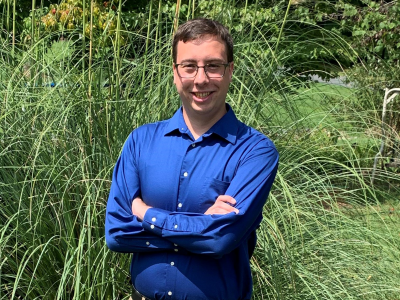 Jonathon Yuly likes scientific analogies. He loves the weird connections mathematical modeling makes visible—like the fact that models of magnetism can also be used to describe neural networks and the way birds fly as a flock.

It was just that type of physical analogy that helped the Physics Ph.D. student make a breakthrough in understanding electron bifurcation, a fundamental process in molecular bioenergetics. He detailed his new theory in a paper published in the Proceedings of the National Academy of Sciences, “Universal Free-Energy Landscape Produces Efficient and Reversible Electron Bifurcation,” which also included Duke faculty members Peng Zhang and David Beratan as co-authors. It solves an enigma that scientists have been working on for over 40 years.

Electron bifurcation was first theorized in 1978 by biochemist Peter Mitchell in his Nobel Prize–winning work on a biological process called chemiosmosis. Mitchell’s great insight was that, inside living cells, positively charged protons move across a membrane, storing the energy those cells use for their basic functions.

In particular, Mitchell studied the process through which humans and other respirative animals extract energy from oxygen and breathe out carbon dioxide. In that context, he realized chemiosmosis only works if an enzyme called complex III splits apart the two electrons it carries. One electron moves to a lower-energy place to convert oxygen to carbon dioxide. Strangely, though, the other electron goes in a loop, ending up back where it started.

The process is like a waterwheel—or a series of waterwheels, since the movement of electrons enables the movement of protons further up the chain. “If you have water flowing downhill, you can couple that to the turning of a waterwheel to do some useful work,” Yuly said. “This is very similar. There’s essentially a flow of electrons ‘downhill,’ and that motion is coupled to the ‘uphill’ flow of protons,” where up and down correspond to energy levels.

While Mitchell understood that bifurcation must be happening, he couldn’t explain how. “If you think about it, it’s very weird because that means one of those electrons is going in a circle,” Yuly said. The mystery was how the electron going downhill provided the energy for the other—and why both electrons didn’t just follow their natural tendency to go downhill. “It can’t be allowed thermodynamically—or at least that can’t happen by itself, because that would be a perpetual motion machine. It has to be driven by something else,” Yuly explained.

In the time since, scientists have proposed many theories to explain how the electrons are split in a nearly perfect one-to-one ratio. But they depended on complex “gating mechanisms” that explained why the two electrons went in different directions, and none were fully consistent or held up to experimental data. Others theorized that gating mechanisms weren’t necessary to explain electron bifurcation, but it wasn’t until now that Yuly discovered the general principle solving the problem the gating mechanisms were designed to fix: "short-circuit" reactions.

Following Mitchell, Yuly thought of the electrons as gears on a waterwheel: the fact that one electron moves to a lower energy place is what pushes the second electron to circle back to the start. “If one of the electrons goes and the other doesn’t, it’s just like a slipping gear,” Yuly explained. These undesirable reactions are also called short-circuit reactions because they are analogous to connecting two ends of a battery together directly, wasting the battery’s energy as heat.

But where others invented gating mechanisms to explain how that coupling works without slipping, Yuly’s breakthrough came from looking at something simpler: the energy landscape the electrons live on. One of the mysteries is that the energy landscapes observed in these enzymes are steep—suspiciously steep, beyond the “uphill-downhill” coupling required by Mitchell. “If you just made the landscape flat then it would be easier for the electrons to flow either way,” Yuly said.

But Yuly realized that the steep differences may actually be key to how the process works, in just the same way that a strong flowing river turns a waterwheel with more power. “I just built a simple kinetic model,” Yuly said. The steep landscapes also cause electrons to get “stuck” in certain low energy places, causing what Yuly calls a “traffic jamming” effect that enables the gear-like motion. Without gating mechanisms or limitations on the number of electrons, as other theorists had, Yuly was able to explain why electron bifurcation works while relying only on “baseline theory—what everyone is going to accept” about how the elements of the system behave.

Because electron bifurcation is so key to how cells harness energy, Yuly’s theory could enable more energy-efficient technologies, like machines that that reduce carbon dioxide or process nitrogen—an essential component in fertilizer—without the massive resource cost it has now.

“It seems possible to me that you could build this landscape into a solid-state device like a transistor without having to worry about a lot of the tricky things that make implementing a device in a biological setting difficult,” he said. “I think we’re still a couple breakthroughs away from these big things, but on a good day I think we have a start.”