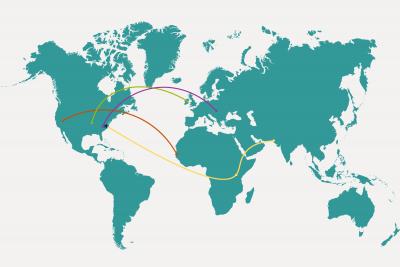 One was supposed to be saying goodbye to her childhood home on the other side of the Atlantic. Another was meant to be working with refugees in Ireland. Two more had plans for research projects in Africa. None of it happened.

With international travel grounded thanks to COVID-19, all of the plans that Duke students carefully laid for the summer came apart at the seams. But Duke’s inherently global nature remains—evident in its diverse student body and celebrated by the Global Baton project.

Started six years ago by Duke’s Office of Global Affairs, the Instagram account allows members of the Duke community to share photos of all the different places across the planet that they work, study and live. “We thought it would be a good way to showcase where Duke was in the world,” said Eve Duffy, associate vice provost for Global Affairs.

This year, Global Affairs’ communicator Amanda Solliday chose a different approach, where student photographers would share images of life in their hometowns. That didn’t go according to plan, either. But by documenting what did happen, it showed something else: “That with their creativity, flexibility, and dedication, our students can connect the globe to their homes,” Duffy said.

For Alexandra Gara, this summer was a surprise, immersive tour of the rural South.

“I went to a tractor supply store,” she said. “I didn’t know that was a kind of store!”

Born to an American mother and Hungarian father, the political science major grew up in Budapest—a place where you don’t need to find farm supplies and livestock dealers. (“They were sold out of live chickens but just about everything else was still in stock,” she wrote on Instagram.) She was supposed to return this summer, helping her mother pack up the family home before they moved.

When flight restrictions made the trip impossible, Gara scrambled to make plans to stay with extended family in Clinton, Tennessee, about 30 minutes outside of Knoxville. Instead of childhood memories, she got the many billboards and farm animals dotting the Tennessee countryside.

Gara is not used to such a view. Thanks to her parents’ dual nationalities, she has lived a global life. “The first time I got on a plane to go over the ocean, I was four or five months old,” she said. She also attended an international school.

Forced to stay still, at least physically, Gara adapted by filling her days with an ambitious schedule. She worked full-time in a consumer sales internship at Amazon, recruiting new vendors to the platform—particularly small businesses owned by people of color—and helping existing vendors improve their Amazon listings. And she also squeezed in a week-long Harvard Business School Virtual Venture in Management program, taking classes during her lunch breaks.

Jamal Burns was supposed to spend the summer creating a fairer, more welcoming world. And he did—just not the way he expected.

The history major intends to become a school principal, so he had planned to work with a nonprofit in Dublin, improving English-language curriculum for newly settled refugees and their children. Once that was ruled out, Burns went to his hometown of St. Louis, Missouri, and turned his focus back to Duke.

In addition to taking two classes to add an education minor, Burns worked with other Duke students to launch a mutual aid network to respond to immediate needs created by the pandemic, like food and rent assistance to students whose livelihoods were upended. He served on the financial steering committee, collaborating with the group’s nonprofit partners to ensure all donation requests were met.

“Now that things are normalizing, we are ensuring that our relationships are a little less transactional,” Burns said. “That’s the whole premise of mutual aid. We’re looking at ways to build and sustain community.”

Those efforts drew on Burns’ longstanding interest in community development. The founder and co-president of Duke LIFE (Low-Income, First-Generation Engagement), Burns explained that his St. Louis upbringing taught him both the harmful injustices of inequitable development and the resilient beauty that exists despite it.

“St. Louis is one of the most racially and economically segregated cities in America,” he said, noting that he went to a Title I public school. “But on the positive side,” he added, “it is a very culturally rich place. I really enjoy the history and the melding of history in the culture here.”

Case in point: though COVID-19 kept Burns indoors most of the summer, he spent much of his non-class, non-organizing time dancing. “It’s kind of ballroom,” he said. “But not the ballroom you’re thinking. Like underground drag culture ballroom.”

When Duke’s campus closed in March, international comparative studies major Miranda Wolford was visiting her sister at her college in California. Wolford didn’t even have clothes for more than a week. They rented a car and drove 20 hours to their parents’ house Coeur d’Alene, Idaho.

Her parents only moved to Idaho two years before, so Wolford didn’t exactly know what to expect. “I’ve never really spent more than a week or two there,” she said.  On top of that, her parents don’t even live in the small town, but half an hour outside of it.

What she found was a place that challenged her presumptions. Set around Lake Coeur d’Alene, Wolford spent her leisure time on the many hiking trails and exploring the town’s many family-owned businesses. But after George Floyd was killed, she learned that Coeur d’Alene has a history of white supremacy. Then there was an unexpected protest in support of Black Lives Matter.

“People came out and had weapons to protect the protestors and their property,” Wolford said. “As a California native, I saw big guns and was terrified. But the local Idahoans were like, ‘That’s how we operate.’”

The experience was a long way from her comfort zone, but it felt even further away from Wolford’s original summer plan: spending six weeks in Senegal, where she previously studied abroad, interviewing women founders of financial technology companies for her honors thesis. To her surprise, though, Wolford found something related to that, too.

Not only was she able to transition her thesis into a podcast series, interviewing Senegalese entrepreneurs remotely, Wolford also connected with Coeur d’Alene’s Innovation Collective. A tech-focused co-working space, the organization “works in a couple different capacities to provide holistic community and help local entrepreneurs grow and scale their companies,” Wolford said.

She was named an entrepreneur-in-residence, sharing her advice and perspective while receiving connections and support for her start-up Limitless Data—a data analytics platform that helps the Air Force predict jet failures, funded by Data+.

Back on campus, the economics major and SPIRE fellow Priya Parkash was developing a cost-optimization tool for DUMAC, Inc. as part of her own Data+ project. From 9 to 5 every day, Parkash sat at the desk in her dorm room, watching the few people remaining on campus walk across the quad while she also researched STEM retention among college-bound women in Kenya.

“A lot of STEM-retention research is focused in the United States,” Parkash said. “There’s not enough research about U.S.-bound college students from developing countries.” Her plan was to work with a college prep program in Kenya, exploring what motivated students to study STEM through quantitative data and one-on-one interviews. Instead, she adapted the research to a remote project, done in the quiet of a mostly-empty campus.

After Kenya, Parkash was supposed to visit her parents in her hometown of Karachi, Pakistan, but potential travel bans and her parents’ healthcare jobs on the front lines of the fight against COVID-19 made her decide against it. “My mom was like: ‘At this point, your flight has been cancelled three times in the last month. You might as well stay there,’” she said.

Thankfully, Parkash is adept at long stays out of the country. She first came to the United States in 2014–2015, serving as a Pakistani Youth Ambassador in a U.S. State Department program. Attending a high school in California and meeting with Congressional representatives in Washington, D.C., Parkash was tasked with improving understanding between the two countries.

“That program really introduced me to the true American people,” she said. “It emphasized the importance of seeking out multiple perspectives, enabled me to develop a global work orientation, and informed my perspective about how powerful a tool cultural diplomacy can be.”

Duke around the world

With that background, it’s no wonder Parkash formed a wide circle of friends on campus—many of whom are international students themselves. She’s also far from alone in having such a diverse social network.

Gara’s Duke experience began at international student orientation, where she was welcomed into a community of students from across the globe. Wolford consciously sought out friends with different backgrounds, and Burns says he is friends with everyone. “I’m one of those people on campus that whenever I walk with my friends, they’re like, ‘Oh my God, Jamal, I can’t walk with you. A 5-minute walk becomes a 20-minute walk.’”

That melding of different global perspectives is essential to Duke’s educational mission. “It would be challenging for us to understand the breadth of human experience without international students on our campus,” Duffy said. The insights made available by such a variety of experiences are central to what students learn on campus. That might be one reason why so many have found ways to maintain international projects, even when travel was impossible.

International students can find information about the fall semester at the Keep Learning website.