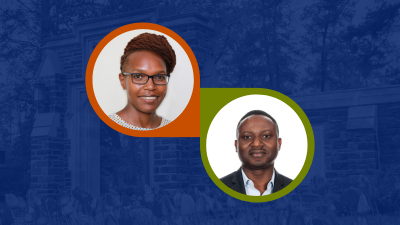 Grace Musila (left) and Eric Mvukiyehe will join the Trinity faculty this year.

Both hires were supported by a $4 million grant from The Duke Endowment, a private foundation based in Charlotte. The funding is dedicated to hiring up to six new scholars with expertise on Africa, Asian-American studies or Latinx studies.

Musila comes to Duke from the University of Witwatersrand in Johannesburg, South Africa, where she was an associate professor in the Department of African Literature. She received her Ph.D. from the same institution, and was a faculty member at South Africa’s Stellenbosch University before returning to Witwatersrand.

With interests in anglophone African literatures, African popular culture, African feminism and biography, Musila’s research probes relationships between Africa and the global North. Her first book, A Death Retold in Truth and Rumour: Kenya, Britain, and the Julie Ward Murder, examines media coverage of a British tourist’s murder at a game reserve in Kenya to “offer insights into the journeys of ideas, and how these traverse the porous boundaries of the relationship between Kenya and Britain.”

“We are thrilled to welcome Professor Musila to our department,” said Robert Mitchell, chair of the Department of English. “Professor Musila’s work engages with so many of the issues noted in the original advertisement for the position, and especially political development and institutions, decoloniality, cultural production and new knowledge formations. And Professor Musila’s emphasis on the different kinds of work performed by narratives, whether these are narratives within journalism, gossip or literature, means that her work intersects with essentially every current research interest in our department.”

Mvukiyehe’s research centers on the political economy of development and international relations. He received a Ph.D. in political science from Columbia University in 2013 and since then has worked as an economist at the World Bank’s Development Vice Presidency (DEC), the premier research and data arm of the World Bank.

“We are extremely excited about the addition of Professor Mvukiyehe to our faculty,” said Georg Vanberg, chair of the Department of Political Science. “His expertise in African politics adds a critical regional dimension to our offerings that has been sorely lacking. And his substantive interests in democratic consolidation and conflict resolution create natural complementarities between our strengths in political economy and in security, peace and conflict. Moreover, his exceptional record in the design and execution of field experiments connects to important methodological developments in political science."

Hiring both Musila and Mvukiyehe is one part of Trinity’s response to student interest in increasing the global perspectives available at Duke. “Thanks to Valerie Ashby’s bold initiative and a generous grant from The Duke Endowment, we are fortunate to be adding two brilliant scholars from the continent to the faculty, further diversifying Duke’s faculty and providing a range of new course offerings for students,” said Professor of Cultural Anthropology and African and African American Studies Charles Piot, who led the search.

He was joined on the hiring committee by Professor of Romance Studies and History Laurent Dubois; Associate Professor of English Tsitsi Jaji; and Professor of Political Science Edmund Malesky; supported by Dean of the Social Sciences and James B. Duke Professor of Economics Rachel Kranton.