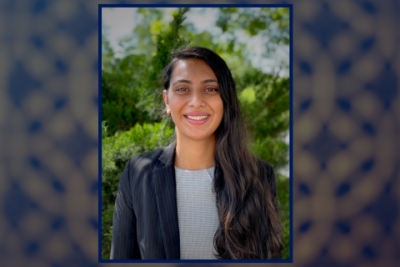 Duke alumna Swathi Ramprasad has been named one of four Eisenhower Global Scholars for the next academic year.  She is the first Duke student to win this award.

The award provides full funding for Ramprasad to attend the University of Oxford’s Blavatnik School of Government to pursue a master’s degree in public policy.

Ramprasad, from San Jose, California, graduated from Duke in May 2021 with a double major in Computer Science and Public Policy. Throughout her Duke career, Ramprasad has been interested in the intersection of technology and social good. Her honors thesis on the demographic biases of pretrial risk-assessment algorithms in the local justice system was awarded “highest distinction” by Duke’s Sanford School of Public Policy. She is the founder of Duke’s Cyber Policy and Gender Violence Initiative, where she has sought to create a research home for issues of privacy and technology as they relate to survivors of gender-based violence. In line with her interests, she has completed internships at both Facebook’s Civic Integrity team and the ACLU of Pennsylvania.

At Duke, Ramprasad led a program called SuWa through Duke’s Kenan Institute for Ethics that connects recently resettled refugee women in the Durham area with undergraduate mentors. While working with this community, she noticed that refugees faced language and information barriers in securing jobs and social services.  Ramprasad intends to use the Eisenhower Global Scholars project to serve this unmet need.

Ramprasad will create a multilingual website for the refugee population of Durham.  The one-stop site would consolidate social-service applications, job opportunities, and public-service announcements in an easy-to-use, translated format for immigrants. “Working with the Durham community has been one of the most enriching parts of my Duke experience,” she said, “and I’m indebted to the community members who have taught me so much over these past four years.”

Professor David Hoffman, who heads Sanford School of Public Policy’s Cyber Research team and who has worked closely with Ramprasad says, “Swathi is the perfect example of a dedicated change agent who will make the world a better place through her exceptional work ethic, integrity, empathy and resilience.”