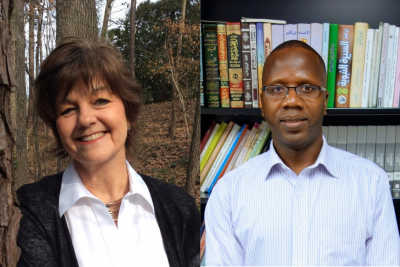 The items in each pair aren’t always considered together, but two Duke faculty members argue that doing so clarifies important facets of our world, and both will use National Humanities Center fellowships to make their case.

Mbaye Lo, associate professor of the practice of Asian & Middle Eastern Studies and International Comparative Studies, and Nancy MacLean, William H. Chafe Distinguished Professor of History and Public Policy, are among the National Humanities Center’s 36 fellows for the 2021–22 academic year. They will spend a year away from their regular teaching duties as resident scholars at the Research Triangle Park–based center, working on independent book-length projects.

Lo’s project, Blacks in Arabic Sources: An Intellectual History of Africanism in the Arab World, is an attempt to understand anti-Black racism—which Lo calls “Africanism”—in Arabic-speaking cultures on its own terms.

“It is customary for contemporary scholarship to link it with European sensitivities against Black people during colonial times or modern-day Orientalism and Islamophobia,” Lo says. “But the argument I’m trying to make in this book is that there is a genuine Africanism that is older than Islam and older than the European colonial attitudes of the 18th and 19th centuries.”

Taking a broad view of the Arab world—including literature, history, pop culture and religious texts from the 4th century to the 20th—Lo traces Africanism to three sources: the Islamic conquest of northern Africa, and especially Egypt and Sudan; the failed Zanj rebellion in Iraq in 869, in which Black slaves revolted, contributing to the fall of the second caliphate; and religious textbooks that helped codify the laws and regulations of slavery in late 8th and early 9th centuries.

By tracing Africanism back to those sources, Lo is resisting a common Eurocentrism in the study of the subject. Studies of Black people in the Arab world are often invested in understandings of the trans-Atlantic slave trade, Lo says, while in actual fact slavery practiced in the Arabic speaking world was part of a different history: the trans-Saharan slave trade, which had different impacts.

“Blacks are not outsiders in the Arabic-speaking world,” Lo says. “Blacks were insiders in the Arabian Peninsula before the coming of Islam; they were among the knights, poets, mercenaries, conquering rulers and enslaved Abyssinians. With the rise of the new Arab-Muslim empire, Blacks were also among the pioneering pious Muslim believers and conquering soldiers in Egypt. But a major change happened form the 9th century onwards.”

Tracing those changes through literature and language—including the development of two different words and functions for “slave,” depending on the race of the person—Lo says he hopes to provide a fuller historical context for how we think about race today. “My project also analyzes the literature of protest emerging from contemporary Black Arab activists,” he says. “These rising voices offer innovative ways of rethinking Blackness within an inclusive worldview.”

MacLean’s project, Capitalism and the Constitution: An Overlooked American Lineage and a Looming Peril, comes after her acclaimed 2018 book Democracy in Chains: The Deep History of the Radical Right's Stealth Plan for America.

A finalist for the National Book Award and winner of the Los Angeles Times Book Prize, Democracy in Chains traced recent attacks on unions, voting rights, public education and climate change responses back to the influence of Nobel Prize-winning political economist James McGill Buchanan. Paired with funding from right-wing activist billionaire Charles Koch, MacLean argued, Buchanan’s “brilliant, if diabolical, plan to undermine the ability of the majority to use its numbers to level the playing field between the rich and powerful and the rest of us” was put into action.

The impact of donors like Koch are still central to MacLean’s work, focusing specifically on the way they seek to change the constitution. Speaking to The Progressive this spring, MacLean said they have declared “open season on voting rights around the country.”

“They understand their agenda is terribly unpopular, that nobody wants the extreme, libertarian agenda,” she said. “So the only way that they can win is by weaponizing prejudices of different kinds to drive [their] voters to the polls and suppressing the vote [of others]. This has been a focus of groups like the American Legislative Exchange Council, an intrinsically antidemocratic project.”

Now is the time to push back against those efforts, MacLean has argued. “But people also realize, too, that this crisis has created an opportunity for the kinds of needed reforms to our democracy,” she told The Progressive.