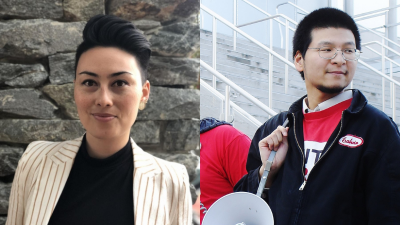 Their positions are supporter by a $4 million grant from The Duke Endowment, a private foundation based in Charlotte, dedicated to hiring up to six new scholars with expertise on Africa, Asian American studies or Latinx studies. Cheung-Miaw and Storti will join Eric Mvukiyehe—an expert on contemporary Africa announced in March—at Duke this year.

“During the course of the search, it became apparent to the search committee that the cluster hire was meeting a critical need at Duke and that the search could not have been timelier,” said Theater Studies Professor Esther Kim Lee, who chaired the Asian American studies search.

Cheung-Miaw is currently completing his Ph.D. in Modern Thought and Literature with a minor in History at Stanford University. His dissertation, “Asian Americans and the Color-Line: An Intellectual History of Asian American Studies, 1969–2000,” is a field-defining work that tracks the movement of the color-line in the post-war United States history of race, while remaining sensitive to the changing geopolitics of Asian societies and their migration relationships in the United States.

Through an examination of academic, legal and literary writing, Cheung-Miaw traces Asian American engagement with radical Third World and Civil Rights movements. His journal articles in Pacific Historical Review; Politics, Groups, and Identities and Amerasia Journal cover topics as diverse as a historic Chinatown in the Sierra Nevadas between 1870 and 1880 and the murder of Filipino and Taiwanese human rights activists in the Reagan era.

“Calvin Cheung-Miaw brings an impressive commitment to diversity, inclusivity and service-learning to bear upon his teaching, based on his experience of working for several years as a labor organizer in Silicon Valley prior to entering graduate school to pursue his Ph.D.,” said Sumathi Ramaswamy, James B. Duke Distinguished Professor and chair of History. “Pulling together activism and academic learning, his teaching and scholarship will deepen our department’s continued commitment to interdisciplinarity, trans-national research and writing, as well as comparative and global history.”

Storti will join Duke from Dartmouth College, where she was a postdoctoral fellow. She completed her Ph.D. in Women’s Studies at the University of Maryland in 2020 with research focused on critical mixed-race studies, empire studies, performance studies and transnational queer studies.

Centering her work on the violence of racial fetishization and explorations of “racialized anger” at white supremacy, Storti argues that racial mixture is rooted in the legacies of coloniality and racialized and sexualized violence. By interrogating films, performance art and even home décor—including dolls linking Japan and West Africa; porcelain invoking Chinese, Russian, and Irish influences and a Los Angeles-based Vietnamese Cambodian artist’s depiction of a Bay Area Filipina rapper as a Hindu goddess—Storti examines the artistic and material expressions of racial mixture.

“Dr. Storti’s teaching will help to meet the growing demand for classes with Asian American content,” said Jocelyn Olcott, professor of History and director of Gender, Sexuality & Feminist Studies. “Not only has Dr. Storti already won recognition for her mentorship, she has already taught both online and in-person, and both synchronous and asynchronous. We could see from her campus visit why she has already gained such a student following, and we are eager for Duke students to have a chance to meet her.”